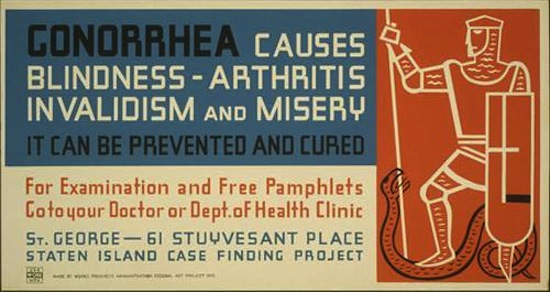 The last oral antibiotic that is effective in curing the sexually transmitted disease gonorrhea may not be effective anymore. A study published today in the Journal of the American Medical Association (JAMA) found that the oral antibiotic cefixime was ineffective in treating the disease in 7% of cases where it was prescribed. For those of you who have been playing along at hom, watching gonorrhea get scarier and scarier, you can move your “STD Doomsday Clock” one minute closer to midnight, as pretty soon, the only viable medical treatment for gonorrhea will be “getting set on fire and thrown on the pile.”

Antibiotic resistant strains of the disease have been seen in Europe before, but this is the first time a strain that can’t be killed off with a liberal application of cefixime has been encountered in North America. While it’s disappointing and troubling, it’s not a surprise — STDs travel because the people who have them do, and antibiotic strains can take advantage of their invulnerability to become common strains in short order.

Over the last ten years, the dosage of cefixime needed to treat gonorrhea has risen steadily, but today brought the bad news that doctors and public health officials in North America have been simultaneously waiting for and dreading: the only pill effective in treating gonorrhea isn’t anymore. A study of 133 cases at a Toronto sexual health clinic found that 7% of patients prescribed cefixime returned with their infections intact, the gonorrhea bacteria having outmuscled the pill meant to kill it off. While it’s a small study, that 7% number is nothing to laugh at. If antibiotic resistant gonorrhea has arrived, then the percentage of cases in which cefixime just isn’t enough is only going to go up. What’s worse? The study uses data collected on patients between 2010 and 2011, meaning that not only is antibiotic resistant gonorrhea here — it’s been here for some time, which means it has been spreading.

The fall of cefixime leaves just one treatment — an injectable antibiotic called ceftriaxone — as the last remaining firewall between us and gonorrhea that simply can’t be cured, relegating a lot of people to a lifetime of burning urination, blindness, and as the above sign warns, general misery. So if you’ve been stashing away anibiotics for the coming post-apocalypse, now may be the time to trade them in for something more useful, like canned food or kerosene.