NASA Releases Highest Resolution Map of the Moon Ever Made 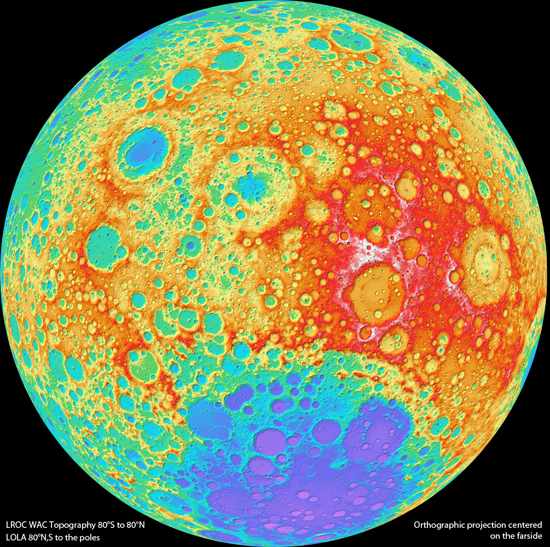 NASA has announced the release of the GLD 100, also known as the most accurate, highest resolution map of the Moon ever created. The map was made using instruments aboard the Lunar Reconnaissance Orbiter (LRO). The image above is a piece of the map, showing the far side of the moon at one pixel per 100 meter (328 foot) scale.

The fact that it has taken this long to produce a high-res map of our closest neighbor in space is a real testament to the difficulties involved in space travel. In order to create this map, NASA used a series of measurements from the LRO compiled over time. Using 69,000 images from the LRO’s wide angle camera (WAC), and laser measurements from the Lunar Orbiter Laser Altimeter (LOLA), the map began to take shape.

While the map has some holes in it — less than 1.8% of the total surface of the Moon, its creation is the culmination of a huge technical effort and was only possible from the instruments on the LRO working in congress. From NASA:

The near-global topographic map was constructed from 69,000 WAC stereo models and covers the latitude range 79°S to 79°N, 98.2% of the entire lunar surface. Due to persistent shadows near the poles it is not possible to create a complete stereo based map at the highest latitudes. However, another instrument onboard LRO called LOLA excels at mapping topography at the poles. Since LOLA ranges to the surface with its own lasers, and the LRO orbits converge at the poles, a very high resolution topographic model is possible, and can be used to fill in the WAC “hole at the pole.”

Even better than a high-res map of the moon, is that because the LRO is still orbiting and mapping the lunar surface, the scale of the map will only get better over time.

Of course, NASA puts its emphasis on the geologic science that can be carried out with so accurate a map. However, I have a modest and sexier suggestion for its use: Moon base. Just sayin’!