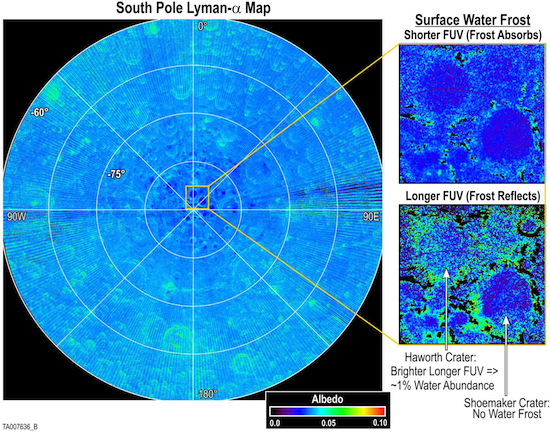 The vision of the moon as a completely dry, desolate sphere was soundly shattered two years ago when the LCROSS impactor kicked up a collection of icy crystals on the surface of our lunar neighbor. But a new study using instruments aboard the Lunar Reconnaissance Orbiter (LRO) shows that in the darkest regions of the moon — where the sun quite literally does not shine — there is far more water than anticipated.

Using sensors on the LRO, researchers with the Lyman Alpha Mapping Project (LAMP) believe that the permanently shadowed regions (PSRs) contain quite a bit of water. According to Dr. Randy Gladstone at the Southwest Research Institute, as much as one or two percent of PSRs could be water frost.

Finding this frozen water wasn’t easy. As the name suggests, PSRs receive no light and therefore cannot be imaged with conventional means. The LAMP, however, relies on nonvisible light in the form of ultraviolet and infrared emissions from hydrogen atoms. Their ultraviolet analysis revealed that the lunar soil was extremely porous and “fluffy” in some regions.

In the image above, “redder” regions have more water frost at the surface, while the darker regions are fluffier and bereft of water.

Fluffiness is not ideal for holding on to water, and that’s where the infrared data comes in. It showed that water frost was not only making up a surprising percentage of PSRs, but that it was far longer lived than expected. Even without the warmth of the sun, water will eventually breakdown on its own. The LAMP team found that this process was occurring 16 times slower than expected.

For scientists, this new data is helping them to understand the make up of the moon, and other similar celestial bodies. On a more practical level, understanding where the water is on the moon and how it behaves on the lunar surface is vital information if humans are ever going to establish a permanent moon base. I can’t wait to buy some crater-front property.

Relevant to your intersts