Did a Tiny Art Museum Secretly Land on the Moon in 1969? 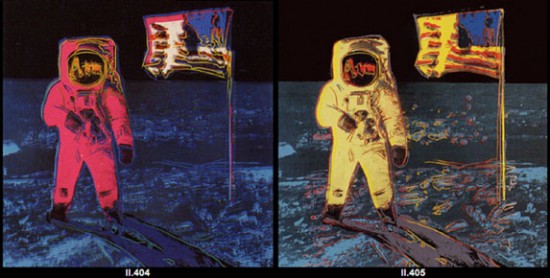 Japanese robots may someday build a moon base, which would be the first permanent lunar structure. But their base would still be coming after the first art museum on the moon, which may have been unknowingly founded over 40 years ago.

USA Today reported on the story to air June 21 on PBS’ History Detectives, in which through a series of covert actions, work by six prominent 1960s artists was snuck onto the Apollo 12 lunar lander, which would mean it’s still on the moon to this day. Allegedly, Andy Warhol, Claes Oldenburg, and Robert Rauschenberg, David Novros, John Chamberlain and Forrest “Frosty” Myers each contributed a sketch which was then shrunk down and fitted to a chip a half inch by three quarters of an inch. The teensy weensy art collection was then supposedly stowed onto Apollo 12 by engineer “John F.” The motivation for PBS to break the story before the show is actually to get this “John F” to come forward and confirm, since he was to orchestrate the caper’s final step and thus only he knows whether it actually succeeded. So if you’re reading this, John, come forward. Also, you’re amazing.

This may seem incredibly farfetched, but according to USA Today, the evidence is overflowing. We have:

Here’s hoping John F announces himself in time for the official History Detectives airing. That final confirmation would make the story that much cooler. But even so, it seems very like that for over 40 years there has been a tiny, secret art museum hiding out on some corner of the moon, waiting for aliens to find it.

Even if we don’t get firm confirmation soon, maybe we could ask one of those Japanese robots to find it for us.

(Via USA Today via PopSci)