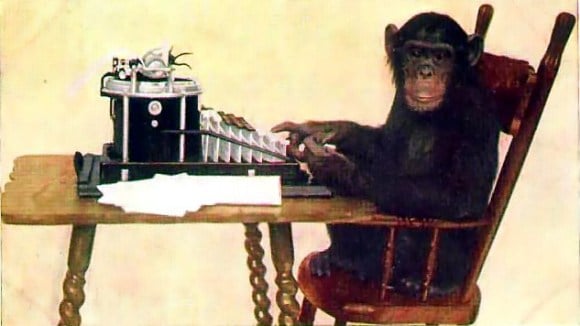 If you have never heard of the infinite monkey theorem, here is a crash course: if an infinite amount of monkeys are given an infinite amount of time and typewriters, they will eventually type an entire written work, such as something by William Shakespeare. Someone actually ran this experiment and came up with approximately 99.99 percent of the Bard’s poem, “A Lover’s Complaint.” There is a catch, however — the monkeys were only virtual. I’m calling shenanigans. I will only accept an infinite amount of actual monkeys, thankyouverymuch. But let’s take a look at what happened with the virtual monkeys, shall we?

The programmer who ran this experiment, Jesse Anderson, simulated monkeys randomly hitting keys on a standard QWERTY keyboard by turning the monkeys into computer programs that were then uploaded onto Amazon servers. Each of these programs would churn out “random sequences of text.” So you could (and Anderson did) call them “Amazonian Map Monkeys.”

Each sequence is nine characters long and each is checked to see if that string of characters appears anywhere in the works of Shakespeare. If not, it is discarded. If it does match then progress has been made towards re-creating the works of the Bard.

And that is how the Amazonian Map Monkeys came up with a near-perfect version of “A Lover’s Complaint” over the course of about one month. (More statistics: “over 5 trillion character groups have been randomly generated and checked out of the 5.5 trillion possible combinations.”) But without the constraints of sequence length, mathematicians say that the infinite monkey experiment would take, well, an infinite amount of time. Because they are monkeys, typing random letters. Honestly, I would have preferred to read about an experiment with actual monkeys who actually are given actual typewriters or word processors (remember those?), perhaps not an infinite amount of them, but I can see why Anderson chose virtual ones. (The smell, obviously.)

This experiment is pretty close to my heart because there is a one-act play about it by David Ives called Words, Words, Words, and I was in it my senior year of high school. Humblebrag: I was the monkey who ended up typing Hamlet. Oh, yes. And now I must give props to my fellow “monkeys,” Terence and Josh, our director Anselm, and our drama teacher Mrs. Glynn. Because I’m not gonna lie, we were awesome. And I got to fly off of a tire swing.