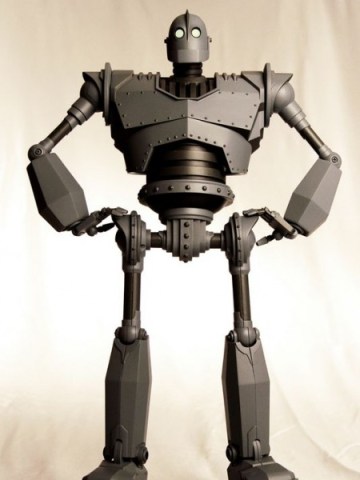 Mondo, of truly excellent posters fame, is branching out into the toy market. And I really hope their toys sell out as quickly as their posters tend to, because otherwise my wallet’s going to be taking a major hit. The first toys, writes USA Today, will be available for ogling at Mondo’s SDCC booth this weekend, with preorders hopefully opening on Mondo’s website in August or September. Mondo CEO Justin Ishmael says he hopes to expand the high-end toy line and eventually have it for sale in places like Target. His wish list includes Disney, Game of Thrones, an unspecified horror franchise, and Batman: The Animated Series.

For now, the toys initially on offer will include “a vinyl figure based on Teenage Mutant Ninja Turtles co-creator Kevin Eastman’s first drawing of a Ninja Turtle, a ‘Lil Mikey’ vinyl figure based on a Mondo TMNT poster by artist Mike Mitchell [picture here], and a sixth-scale action figure of legendary director Alfred Hitchcock.” Oh, and the 16″ Iron Giant figure, above, which has 30 points of articulation, lights up, “has a magnetic ‘S’ from a ‘Seafood’ sign to put on his chest, and has an interchangeable dented head and weaponized arm to make a ‘War’ version of the character.”

I think I just felt my heart skip a beat.