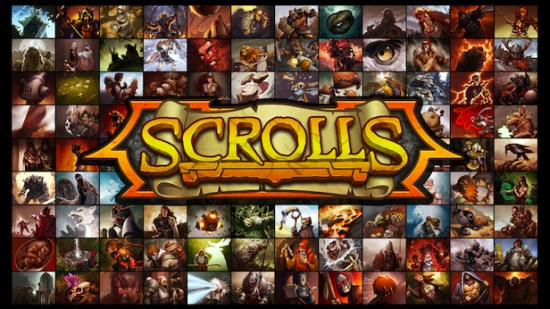 The time has come for Mojang’s second game, a digital collectible card battle game, Scrolls. Though, to be clear, the alpha has come; not the final build. Mojang fans will recall that early released alpha versions of their products don’t exactly go poorly, as that was the route the ever popular Minecraft took long before it ever released as a “retail” build. The game isn’t downloadable by all, however, and Mojang will be sending out alpha keys via email to a modestly sized list of lucky participants. More details below.

There’s nowhere to sign up for an alpha key anymore, so those unfortunate souls that forgot to sign up for the alpha long ago will have to wait until the open beta to try out Mojang’s new game. They announced they’d be sending alpha keys via email to people randomly selected off the alpha signup list, so all you can really do is cross your fingers and hope you’re not the only one to miss out on a key.

Mojang’s announcement lists the key features for the alpha version of Scrolls. First and obviously, the game features deck building, which comes with a full set of scrolls (the game’s version of cards) and a pre-constructed deck for those who want to jump right into the action. Players’ alpha accounts will contain three of each scroll available in the game, and the game can support as many constructed decks as the players wish. The alpha offers a single player mode, though it does not offer the world map or bosses that will be in later builds of the game. However, players can play an A.I. opponent with various decks, which can be tuned with three different difficulty settings. The multiplayer mode offers chat, as well as a direct challenge and random opponent option. That’s about it for now, and considering the game is in early alpha, we can’t really expect much more than that. If the alpha release of Scrolls provides a level of entertainment akin to Minecraft’s alpha, we’ll be in for a treat right up until the final release.

Good luck on getting lucky with those alpha keys, and check out a gameplay trailer below.