Moby Dick in Space. Is an Actual Thing. That is Happening 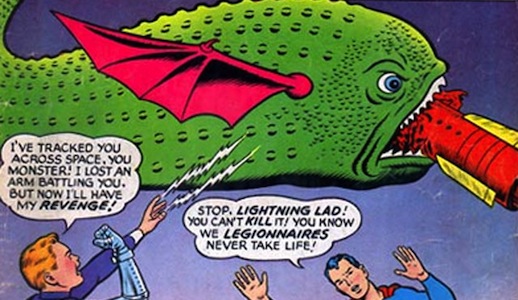 Sadly, it probably won’t involve Superboy or the Legion of Superheroes, or any other trappings of Golden Age DC Comics.

The project, which just found financing and a producer, is headed up by Lynne Ramsay and Rory Kinnear, the co-writing team behind We Need to Talk About Kevin. That in itself is interesting, as a taught psychological thriller that tackles the oft-unseen in media idea of a woman who never quite adjusts to motherhood and is disgusted by her own child doesn’t seem to have much in common with a film with a premise that sound like a Michael Bay film.

They’re describing the film, named Mobius, because of course that’s the pun you make for a Moby Dick in Space movie, as a “psychological action thriller set in deep space” where “a captain consumed by revenge takes his crew on a death mission fueled by his own ego and will to control an enigmatic alien.” So the movie has a chance of moving beyond the simplicity of its premise, regardless of whether it finds a space analogue for squishing whale semen by hand. A punny title doesn’t seem particularly reassuring, however much it may metaphorically relate to the unending quest of Captain Space Ahab.

(The Hollywood Reporter via The A.V. Club.)