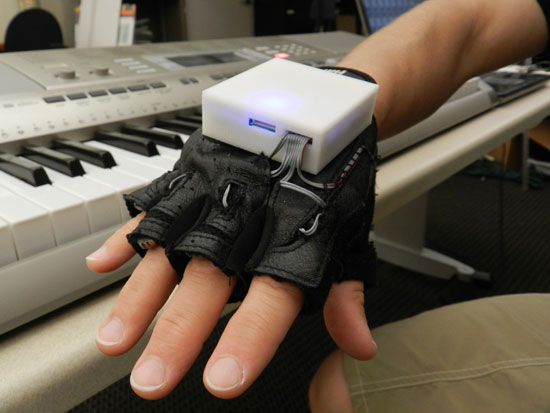 With a name like “Mobile Music Touch,” what might spring to mind is an awkwardly named iPhone app in some way related to music. But its actually a novel treatment for people who have lost sensation in their hands from a spinal cord injury. Not only does it have therapeutic benefits, but it also teaches people to play the piano in the process.

Developed by Tanya Markow at Georgia Tech, the MMT is a pretty simple device consisting of a glove, a control box, and five small vibrating motors. These have two functions: The first, to vibrate continuously and help restore feeling and mobility to people suffering from spinal cord injuries. Previous studies have shown that vibrations can have a restorative effect, and a recent study with the MMT supports these results. Unlike other therapeutic devices, the MMT is small enough to be worn comfortably for extended periods of time.

However, the MMT has a second trick — it teaches music. As music is played, a light-up keyboard indicates the correct key and the MMT vibrates the corresponding finger.

A recent study, focused not on piano playing but on frequent wear of the MMT alone, had promising results. Markow is quoted by Georgia Tech as saying:

“Some people were able to pick up objects more easily,” said Markow. “Another said he could immediately feel the heat from a cup of coffee, rather than after a delay.”

The musical component of the MMT is important, though. For one thing, the researchers found that users who learned songs with the MMT learned them faster. It also gives users more of an incentive to use the device, and a goal to work towards. Thad Starner, from Georgia Tech’s Contextual Computing Group, is quoted as saying:

“Equipment used for hand rehabilitation may seem monotonous and boring to some, and doesn’t provide any feedback or incentive, […] Mobile Music Touch overcomes each of those challenges and provides surprising benefits for people with weakness and sensory loss due to SCI. It’s a great example of how wearable computing can change people’s lives.”

While extremely promising, Markow and her colleagues are looking forward to further research using the MMT — expanding it to include MRI studies to observe the effects on patients more directly. For my part, I’m just hoping that the musical training component sees wider application in the near future. There are a lot of instruments I’d like to play, and an electronic trainer might just be the thing to combat my titanic laziness.