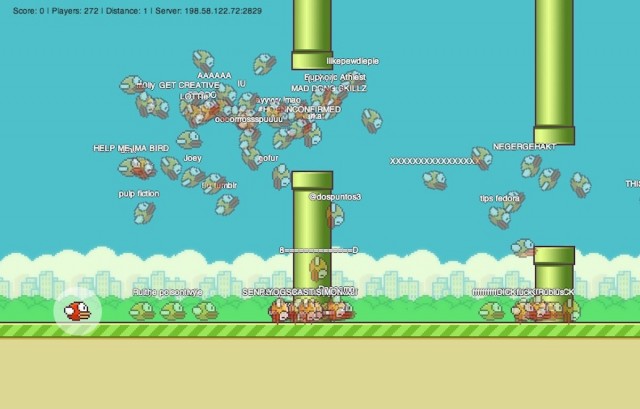 Flappy Bird‘s removal from the app store has propelled it even more solidly into cultural phenomenon status, which has caused a lot of silly knockoffs that are quickly growing redundant. On the other hand, some have taken it upon themselves to turn the original game into an MMO and an old school text-based game, and they’re kid of more fun than the original.

FlapMMO, which you can find at the appropriately named flapmmo.com, gives the game a community feeling in a much more streamlined way than everyone sharing their laughably (if understandably) low scores and clogging up your Facebook feed.

As you play, you can give your own little bird a name, and then everyone can see each other fail miserably over and over again. There’s an added reward to doing well in this version, as once you pass the third or fourth pipe, the herd thins out to a handful of birds or less. The game itself becomes a weird playable commentary on the original—right up until your amusement at everyone being stuck on pipe three causes you to smack face first into pipe four.

Then, there’s the text-based version that older gamers will find familiar. It sets up the game’s simple premise, which is that “yer a bird.” It tells you how high you’re flying, and presents you with two options. “Flap,” or, “Don’t Flap.” After each flap, it will tell you whether or not you ran into DAT DEFINITELY NOT MARIO PIPE, and then you must choose whether to flap or not flap for the next one. 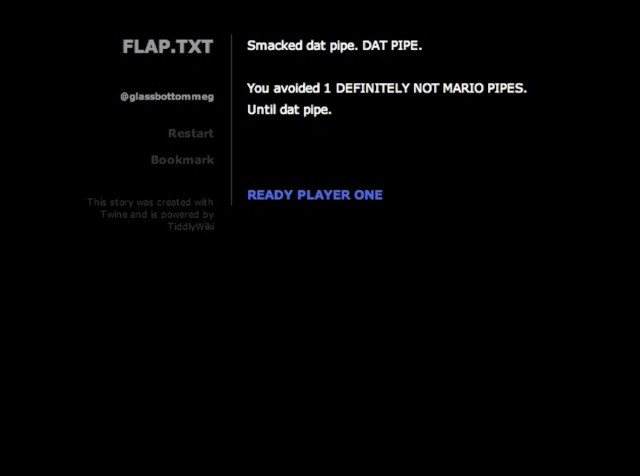 As it turns out, taking the graphics out of the equation entirely has very little effect on the difficulty of Flappy Bird. So, if you’re sick of all the Flappy Bird knockoffs, maybe these genre benders can help you laugh at the whole phenomenon. If not, and you still want to play Flappy Bird clones, I recommend Sesame Street‘s adorable Flappy Bert. 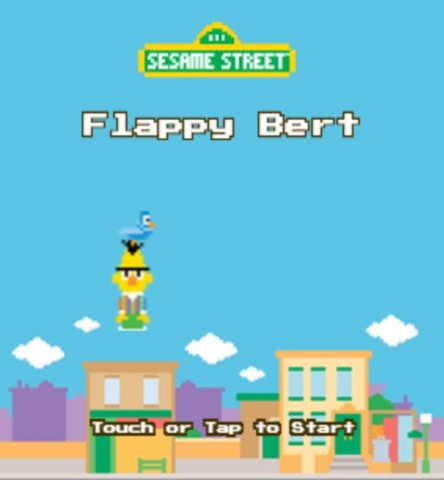