Today in Ladies Who Can Beat You Up: The UFC Starts a Female Division, Hires Its First Openly Gay Fighter 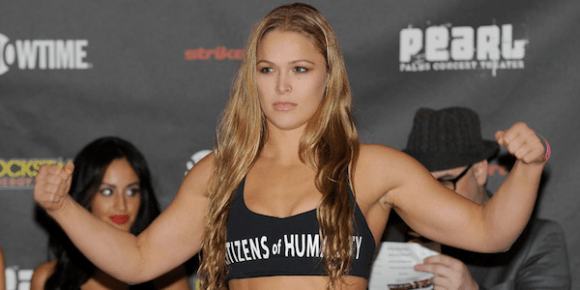 You might not be a fan of Mixed Martial Arts, or MMA. That’s fair. But even if watching people beat the crap out of each other on Pay-Per-View isn’t of particular interest to you, this bit of news is still pretty cool: UFC, the world’s biggest MMA promotion company, has created its first female division. And crowed its first female champion. And signed its first openly gay fighter, also a woman.

The champion in question is “Rowdy” Ronda Rousey (pictured), whose extreme popularity is part of the reason the UFC decided to create a female division. In addition to all the fights she’s won in the arena, she also represented the U.S. in judo at the last three Olympic games. (When she competed at Athens in 2004 she was only 17, making her the youngest judo competitor there, and her bronze medal at Beijing made her the first American to win an Olympic medal in the sport since it was added to the Olympics in 1992.)

Basically, in the world of MMA Rousey is a really big deal. Her first UFC fight will take place in February against Liz Carmouche, who became the UFC’s first openly gay fighter when she signed on yesterday. UFC isn’t the most inclusive in terms of sexuality (president Dana White once threw a fit about a male fighter wearing lavender spandex shorts), so hiring an openly gay athlete (even if, as Jezebel notes, “it’s doubtful that openly gay male fighters will be given the same welcome anytime soon”) is particularly good.

UFC has promised that it will promote its women’s division as much as it does the men’s. I don’t give a hoot about sports, and my knowledge of MMA begins and ends with the movie Warrior, but I think this is really cool. The Atlantic Wire points out that if the UFC actually does promote its female and male fighters equally it would become the first major sports organization to do so.