McConnell is partying with Brett Kavanaugh while the world burns. 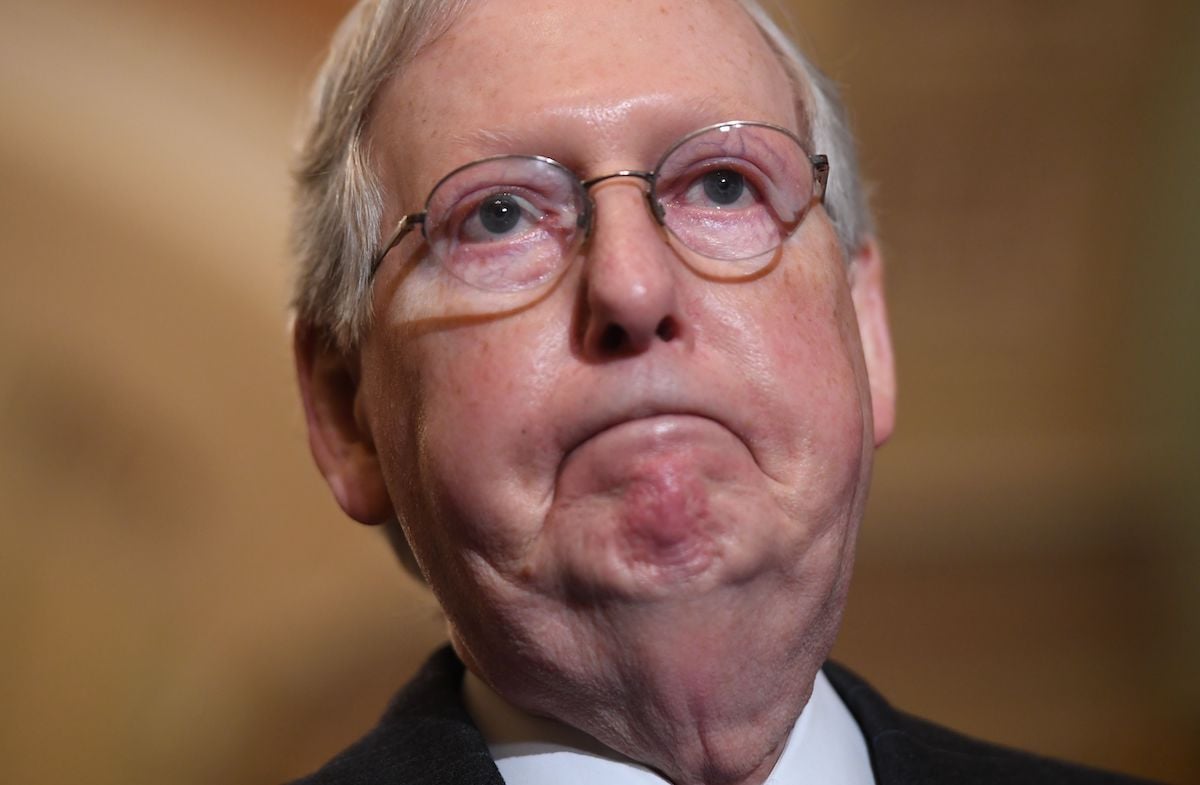 In the midst of the largest health crisis in decades, when fast action is critical to the country’s health, Senate Leader Mitch McConnell is packing up his toys and going home. The Kentucky senator declined to keep the Senate in chambers and joined Supreme Court Justice Brett Kavanaugh at an oath ceremony for U.S. District Judge Justin Walker in Louisville.

Just walked off the House floor.

Now the Senate needs to pass this package immediately.

The American people are counting on us. This can’t wait.

After a tense week of negotiations, the bipartisan bill passed in the House just after midnight this morning, with a vote of 363-40. 40 Republicans voted against the bill, and they are listed here. Might be a good time to donate to their opponents, just saying. The bill received a boost when Trump tweeted his support of it and his intention to sign the bill into law.

Pelosi released a statement saying, “[W]e thought it would be important to show the American people, assure the American people, that we are willing and able to work together to get a job done for them, … So we thank our Republicans — those who will be supporting the bill. We appreciate the president joining us with his tweet.”

The only holdup for the bill now is the Senate, which McConnell sent home for the weekend. It is a galling abdication of responsibility during a national emergency, when literally every hour counts. Senate Minority Leader Chuck Schumer released a statement saying, “It was remarkably irresponsible and out of touch for Senator McConnell to send senators out of town for the weekend in the middle of this public health crisis and before the House passed this vital people-focused legislation. Senator McConnell and Republicans should pass this legislation as is immediately so it can get to the president’s desk so he can sign it right away.”

The Senate was scheduled to have a week-long recess next week, which McConnell canceled. But this is hardly the time to take the weekend off. And most people agree, as the hashtag #WheresMitch is currently trending on social media.

But – and hard to make this up – Mitch McConnell had dismisses the Senate already for a long weekend, so he could attend a Brett Kavanaugh event. #WheresMitch https://t.co/LAXe5xLlhF

We have a bipartisan package that passed the House tonight & has been agreed to by the White House.

McConnell needs to bring the Senate back now and call a vote. I don’t care if it’s a Saturday. COVID doubling rate means every 24 hours represents a critical window. #WheresMitch?

These are shelves in Louisville KY. Instead of working on solutions to the pandemic, our senator is AWOL from Washington #WheresMitch He is up for re-election in November. Let's make sure we never have to wonder where is or isn't again. pic.twitter.com/J0KH34dahw

For the Senate to take a vote on the House sick leave bill this weekend (and we must), McConnell needs to call us back into session right now. Senators need to get on flights back to DC today.

The clock is ticking. Lives are at stake.

It’s Saturday morning. There is a bill that will provide relief for people with COVID 19 that the House passed and the POTUS will sign. But Leader McConnell has us out of session from Thursday evening until Monday evening. Time is of the essence. Let’s get this done now.

Like 400 other House-passed bills, it’s now waiting for the Senate to take action. #WheresMitch https://t.co/PrcMZ8JqGl

It is absolutely bonkers that one manturtle can suspend billions of dollars worth of aid during an international crisis, but power is a hell of a drug. McConnell’s democratic challengers just got the biggest gift to their campaign thanks to this dereliction of duty. Democratic hopefuls Amy McGrath and Charles Booker both tweeted about McConnell’s failure:

I'm calling on Mitch to cancel his long weekend, get back to work and mitigate the damage of this public health crisis — which would save lives. pic.twitter.com/zLNid791Is

Whenever a proposal helps those struggling the most, you find a way to stop it.

Helping Americans stay alive and financially secure is not off base.

That’s exactly why you need to go. https://t.co/19MgOXfEAw

Mitch McConnell has been a damaging force in our democracy for far too long. Now would be a good time to donate to his challengers, or to funds like Get Mitch or Die Trying, which puts money towards vulnerable senate campaigns.