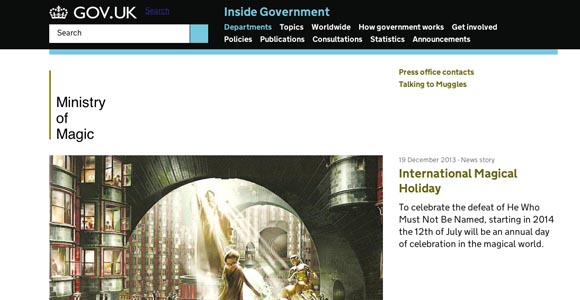 I KNEW IT WAS REAL!

Ok, I guess “real” is a bit strong, but this fan made Ministry of Magic website just adds to my muggle belief that the J.K. Rowling’s world is something I may one day reach. Above is MinistryOfMagic.co, and here’s what the UK’s site front page looks like: 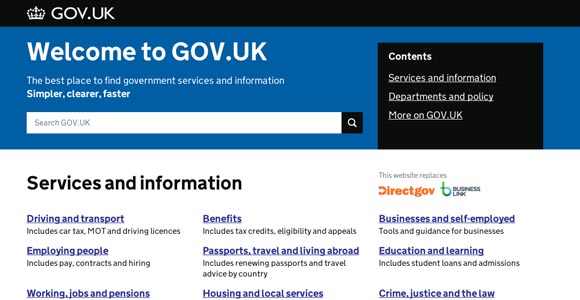 If you were hoping this was perhaps an official Harry Potter site, sorry to disappoint. It was created by London-native and fan Andy Brown. And although all of the links of the front page link to empty posts, the front page is pretty cool. There’s great headlines like, “Portkey awareness: the safe way to use portkeys,” “Partial closure on the floo network this Christmas,” and “Broom maintenance and safe travel during the winter period.”

Then there’s a few small article blurbs such as:

A Ukranian Ironbelly, pictured above during its infamous escape involving Harry Potter, is still on the loose. The dragon in question keeps returning to Gringotts to wreak havoc. The Department for the Regulation and Control of Magical Creatures has not yet been able to safely capture the beast. When attending Diagon Alley, and specifically Gringotts, members of the magical community should be especially careful and keep an eye on underage wizards & witches. We apologise for any inconvenience and assure you that your Ministry is working hard to rectify the situation. Merry Christmas.

Brown built the site to train folks in basic coding skills. Looks like it was updated earlier this month though, and something tells me there would be more than a few fans willing to contribute fictional news stories to the site if Brown wanted to fill it out a bit more (Hint. Hint.), which apparently he does! He told Buzzfeed, “I’m looking into adding some actual content, but have not figure out how I’d produce it yet. Hopefully with support from fans.”