When indie smash hit Minecraft finally hit beta a few days ago, the game’s developer, Notch, said there was a super secret rare item added to the update. The update’s patch notes stated that the secret rare item was more rare than wearable cloaks that only Mojang employees could obtain, which, considering said cloaks are unobtainable by regular players, made the secret rare item pretty darn rare indeed. This, of course, sent Minecraft players into an exploration frenzy, causing them to meticulously explore the game world, as well as search through the game’s texture files.

Well, it turns out the secret rare item is a player skin that only one person, musician Deadmau5, is able to obtain and is only viewable on said player’s server. Notch confirmed this on Twitter, by answering this question with this response. This was confirmed again by another Mojang employee, Jens Bergensten.

In a chat on a Minecraft server, Bergensten (playing under the username “jeb_“) confirmed that the Deadmau5 skin was the secret rare item and it can only be seen on Deadmau5’s server: 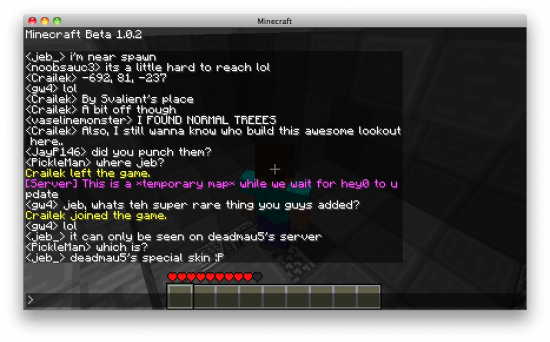 Another Minecraft secret has also been revealed: If players go into third-person view (by pressing F5), they should be wearing a nifty little Christmas cape. The Christmas cape is confirmed, as the screenshot below was taken by me a few minutes ago in my own single player world: 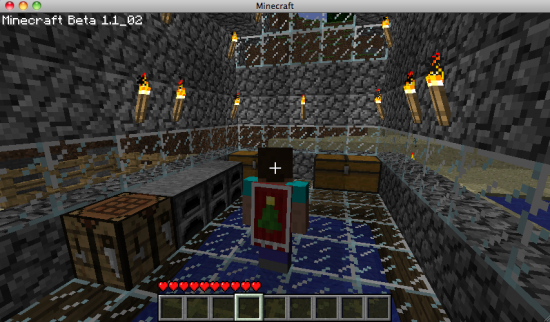 The Christmas cape could have been added in a secret update, considering Notch likes to do secret updates from time to time. This theory seems legitimate when comparing the version build displayed in the top left corner of the above screenshot, 1.1_02, with the most recent update on Notch’s Tumblr, which only announces version 1.1_01. To be fair, though, the Christmas cape might’ve been added in any other update, but was set to display at a certain time, hiding in code until the holidays.

So, the super secret rare item seems to be a skin no one can obtain, but hey, we get Christmas capes for the holidays.