Microsoft Is Working On A Holodeck. About Damn Time! 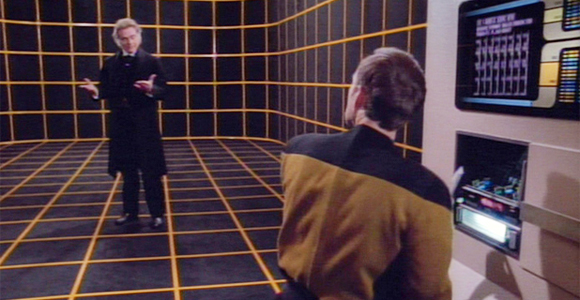 Microsoft has been working on something very interesting in their Edison lab in Redmond, Washington. They’re likening it to a holodeck. You know, that technology from Star Trek?

The Verge has been doing a series on Microsoft’s recent innovations and they may have left the best for last.

Stevie Bathiche, director of research at Microsoft’s applied sciences lab, says to “imagine a day where in your home, one wall is dedicated to being your magic wall. A wall where it can teleport you to another world without really going anywhere.”

It certainly sounds like science-fiction, or as they mention in the adjoining video, a magic trick. What exactly are they making to get to that description?

“Bathiche shows off a number of systems that aim to accomplish this vision,” writes Verge, “including a system that projects LED light to detect a human being’s movements in space, and a glasses-free stereoscopic display that can be ‘steered’ by the viewer as they move.” Take a look at the video.

On Star Trek, the holodeck is used for entertainment, training, and investigating. They’re not quite to the level we’re used to seeing yet but the flat, steroescopic 3D display is pretty impressive. What it boils down to is 3D without 3D glasses but the image changes depending on where your eyes are and also reflects what the screen is seeing, i.e. you and whatever room you’re in. And because it can send an image to both of your eyes, it can also send different images to two different people looking at the same thing.

“We didn’t even know this was possible a year ago,” said Bathiche.

Watch the whole video, you’ll be amazed at what they’ve done and what will be possible very soon. Interacting with your favorite literary characters in their famous books? Here we come!