Microsoft Patents a Display For the Back of Your Phone 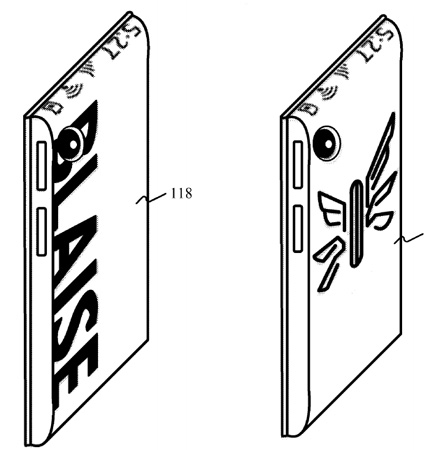 Apple is often credited with beginning the trend in smartphone design where the entire front of your phone is a touchscreen. However, in a 2010 patent filed by Microsoft and published this week by the U.S. Patent and Trademark Office takes it to the next logical level: Your entire phone is a screen. Or rather, your phone has  a second screen on the currently unused back side.

In their write up, Patent Bolt points out that whole-screen phones aren’t exactly new — Nokia showed off a concept last year. However, the Microsoft patent differs in that it does not treat each screen equally. The front-facing screen would continue to be the high-quality, touchable experience we know and love. The rear-facing screen would use a low-powered screen — perhaps something like eInk.

The idea is that the reverse screen could display custom skins, or even information based on what you’re doing on your phone. When you’re playing Zelda game, for instance, the game’s logo could appear on the reverse side. Or when you’re reading an eBook, the cover could advertise to the world that you’re reading Infinite Jest and not just checking your email.

The design could be used to display information like the date, time, weather, battery level, or incoming messages on surfaces that would normally be left unused. In the patent illustration above, the reverse screen is shown wrapping around the top bezel of the phone. In addition to the low-power screen, a second low-power processor could be used to continue displaying this type of information even when the rest of the phone is in “sleep” mode.

Of course, a patent application is not the promise of development — despite its appealing properties. Though perhaps giving up the privacy of a plastic phone back is a bridge we, as a society, are just not ready to cross.