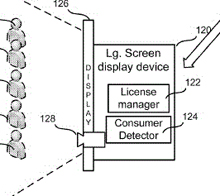 When it comes to rentals and the like, most digital distribution avenues provide their content either for a limited period of time or only allow such things to be played a certain number of times. Neither of these options are exactly effective in the eyes of those businesses that make money off such ventures. Microsoft might finally be doing something about it, though. A patent application from the technology giant indicates that they’re looking to count the number of folks viewing content using cameras and sensors in order to then charge based on the number of viewers.

That doesn’t sound at all like anything a consumer might want. The film industry, though? Let’s just say that this is the kind of technology they probably fantasize about.