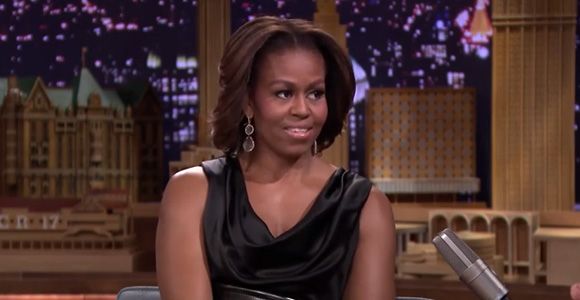 NBC has just announced the First Lady of the United States, Michelle Obama, will guest-star on the Parks and Recreation season finale.

“Michelle Obama is heading to Pawnee,” writes The Hollywood Reporter. “Obama’s cameo will be in the episode titled ‘Moving Up,’ which was filmed in late February in Miami, where she celebrated investments in healthier out-of-school programs as part of her Let’s Move initiative dedicated to solving the challenge of childhood obesity.”

Her appearance in Miami was at a literal parks and recreation center and along with star Amy Poehler. “Just ask yourself this question: Without parks, where would we put all the swings? It would be in the middle of the road,” Poehler joked at the event. “It would be very dangerous. This is so fun – Mrs. Obama is standing next to me like she’s my audience and I’m just telling her jokes. This is like a dream.”

No other details on the particulars of the First Lady’s role were given but others in the political sphere have appeared on the NBC comedy series before like Vice President Joe Biden, and Senator John McCain. And Obama herself is no stranger to TV of course. Besides countless news or talk show appearances, she’s guested on the latest Puppy Bowl and iCarly.

The Parks and Recreation Season 6 finale will be one hour long and air Thursday, April 24 at 8 p.m.

(via The Hollywood Reporter, image via The Tonight Show)