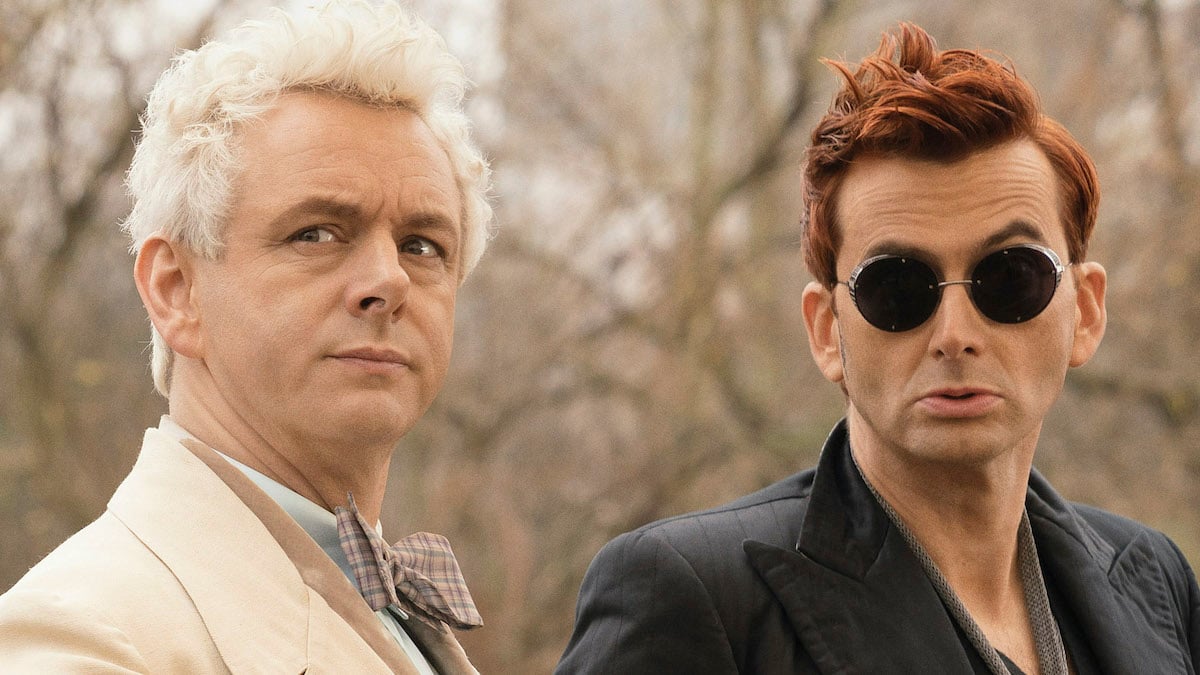 Michael Sheen has given us a clear indication that the end is nigh (again). The Welsh actor posted the transformation of his hair on Twitter, and this platinum portent can only mean one thing: production on Good Omens season 2 must be fast approaching.

In June, news broke that Amazon Prime Video’s Good Omens would be returning for a second season, with Sheen and David Tennant reprising their lead roles as the angel Aziraphale and the demon Crowley, respectively. Fans of the wildly popular adaptation and the original novel by Neil Gaiman and Terry Pratchett were thrilled. The announcement of more Good Omens was both a surprise—since the first “season” covered the entirety of the novel—and also all but inevitable, considering Amazon Studios’ fervently stated desire for more of the hit property.

On Twitter, Sheen teased fans with a rather mysterious picture, though the single angel emoji was a sign of what was happening:

Two hours later, the results were in, with Sheen showing off Aziraphale’s trademark hair.

“Shades of grey,” Sheen wrote on Twitter, adding an angel emoji as he displayed his now-celestial locks. While much about Good Omens season 2 is still under wraps, Sheen’s new hairstyle augurs that everything is moving full steam ahead.

Since the apocalypse was averted the last go-round, it appears that season 2 of Good Omens, which will also be inspired by sequel material from Gaiman and the late, great Pratchett, may have more of a mystery-solving bent. The first synopsis from Amazon reads:

The new season will explore storylines that go beyond the original source material to illuminate the uncanny friendship between Aziraphale, a fussy angel and rare book dealer, and the fast-living demon Crowley. Having been on Earth since The Beginning and with the Apocalypse thwarted, Aziraphale and Crowley are getting back to easy living amongst mortals in London’s Soho when an unexpected messenger presents a surprising mystery.

Many viewers, of course, are hoping that there’s a lot of illumination on “the uncanny friendship” between Aziraphale and Crowley. Even Gaiman was caught off guard by the “velocity and the ferocity and the enthusiasm” of fan reaction to the show and the main characters’ relationship, which was written with the beats of a love story and sparked a massive fandom. While a fandom had long existed for Good Omens, the book, the popularity of the adaptation and its widespread availability generated a fandom response unlike anything I’ve witnessed before in its explosive growth.

Sheen, supportive of fans and good-natured about all interpretations of his character, became fandom’s new boyfriend following his sensitive and nuanced portrayal of Aziraphale. Even two years later, that love affair continues, judging by some of the excited replies to his hair reveal. There’s also a lot of enthusiasm about the idea that Aziraphale could sport a beard this go-round.

all of those what has happened to your hair is the funniest thing ever pic.twitter.com/uIL8KeifJc

Longtime friends Tennant and Sheen have been as attached at the hip as their characters. They starred together in a lockdown TV show for BBC One, Staged, during the pandemic, filming with their partners from their respective houses. They also took the time to read a 30th-anniversary lockdown story as Crowley and Aziraphale and to provide their voices for those parts in a new audiobook edition of Good Omens. We can’t wait to see what lies ahead for this unearthly partnership.