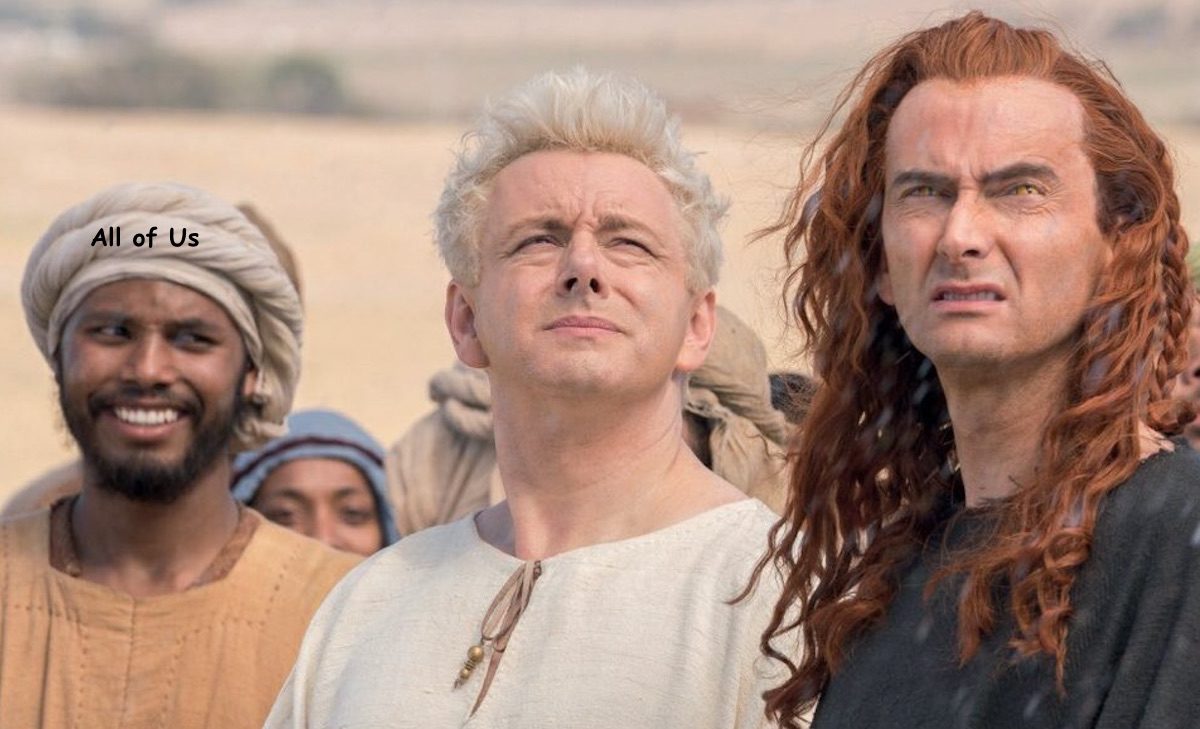 As the co-author of Good Omens, Neil Gaiman knew that a book fandom had flourished for thirty years that ardently shipped the two main characters, Aziraphale and Crowley. But even he was not prepared for the “velocity and the ferocity and the enthusiasm with which people embraced” Amazon Studios’ Good Omens adaptation and its central love story.

In a recent discussion with RadioTimes, Gaiman talked about how “the strength of the fan reaction to the pairing was more than he could have hoped for.” He explained that the enhanced love story came into being when he set out to write the series:

“I needed extra material for them, ’cause there just wasn’t enough in the book,” he said. “I felt, well, why don’t I essentially take the beats of a love story and see how that works? And I was very fortunate in having Michael [Sheen] and David [Tennant] understand that and let it happen…”

A lot of this extra material can surely be found in the celebrated 30-minute “cold open” of the series’ third episode, which tracks the demon Crowley and angel Aziraphale’s evolving relationship—and its ups and downs—across the centuries. It’s some of the most fun and well-executed television I’ve seen in years, and the cold open gives characters that we already care about a richly drawn history. I know people who return to watch the cold open on a near-daily basis, deeming it the media equivalent of comfort food.

There are many other “beats of a love story” throughout Good Omens as well, including the emotionally fraught “break up” scene at the gazebo, on through to the happy ending of Aziraphale and Crowley enjoying champagne at the Ritz together while the soundtrack swells with Tori Amos singing a classic love song.

“Particularly the way that Michael plays Aziraphale just as a being of pure love, I think that gave us something very special, because people of every and any sexual orientation and any and every gender looked at Crowley and Aziraphale and saw themselves in it, or saw a love story that they responded to, and that was completely unexpected.

“Things like this, you can’t manufacture, they have to happen from a fandom.”

Fandom is an organic phenomenon that takes on a life of its own, and it exploded where Good Omens is concerned for a host of reasons that cannot be artificially constructed or even predicted. There are, I believe, a few practical elements that contributed to the fandom’s stunning growth: the show was widely available to binge on Amazon, it was an easily-consumable six episodes (rather than a multi-season or multi-movie commitment), and it came out at the start of summer, when many students (and academics) had less on their plate.

Add in a genre superstar (Gaiman), a tribute to the memory of a late genre superstar (co-author Terry Pratchett), a fantastical book adored for thirty years (Good Omens), a long-beloved actor in online circles (Tennant), and an extraordinary turn from Sheen that transformed him into fandom’s new boyfriend, and you have many stars that perfectly aligned to create a new fannish obsession.

But as Gaiman points out, the real icing on the Good Omens fandom cake was the depth of sympathy between the characters and the fact that the angel/demon dynamic meant that these two were not bound by any binaries of gender or sexuality.

Aziraphale and Crowley could be represented in fanfiction, fanart, and meta discussions in every which configuration, a freedom of interpretation and expression I’ve not seen before. And considering the supportive reaction from the cast and creatives to the fandom, it’s no wonder that it spread like wildfire. Both Gaiman and Sheen spent the summer fueling fans’ ardor on their personal social media accounts, and whoever runs Amazon Studios’ Good Omens Twitter is a genius.

The proof of just how popular Good Omens became can be seen in how fans made the leap from online to off. As Gaiman points out:

“David Tennant said something which I thought was rather wonderful when I was asking him about it – he said at DragonCon this year, for the very first time, he had more demons turn up to pose for photographs with him than Time Lords!”

Personally, I can’t wait for the demon vs. Time Lord war, but that’ll probably have to wait for a Doctor Who Christmas special.

“I’ve seen photographs posted on Twitter from people in Moscow, from the Ukraine, from Japan, from China – which is really amazing because we aren’t legitimately shown in China! From Italy… not to mention America and England and Brazil and Argentina… all these places where people are dressing up as the characters and writing letters about how magical and how important the characters were to them… so it was incredibly unexpected.”

Gaiman goes on to say that while he anticipated that there would be fan appreciation of the series, he could not have foreseen the outpouring of deeply-felt attachment and massed creativity around it. Good Omens, and the pairing of Aziraphale/Crowley, or “Ineffable Husbands,” dominated Tumblr’s fandometrics for months.

“It wasn’t unexpected in the sense that I didn’t expect there to be some fan pick-up of Good Omens, [but it was unexpected in the velocity and the ferocity and the enthusiasm with which people embraced it… the way we became the most popular thing on Tumblr and then stayed the most popular thing on Tumblr for month after month. And you’re sort of going, ‘How did this happen?!’.”

While we’ve explored several reasons why Good Omens‘ fandom exploded, one that has gone less addressed is how hungry audiences are for love stories outside of the binaries we’ve seen on endless repeat. We’re especially starved for stories of this nature with a happy ending: with the triumph of affection—and our real natures, rather than the roles we’re assigned—over all the forces that heaven and hell can muster.

An angel and a demon, “hereditary enemies,” risk it all in the end to save the world and stay together—and they win, and Tori Amos sings us off with a love song. That’s the true miracle of Good Omens.