Babylon 5's Commander Sinclair Passes Away At 60 | The Mary Sue 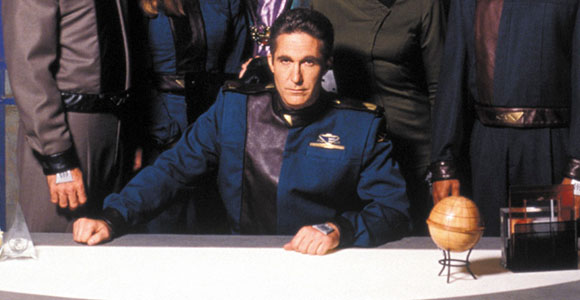 Comic writer, and Babylon 5 creator, J. Michael Straczynski announced via his Facebook page this weekend that star Michael O’Hare had passed away from a heart attack at the age of 60.

O’Hare played Commander Jeffrey Sinclair in Season 1 of the sci-fi series. He left soon after in what Straczynski said was a “mutual, amicable and friendly separation,” but returned a few time down the road to finish up his storyline. “On Broadway, the Chicago native appeared in the original 1989-91 production of Aaron Sorkin’s A Few Good Men as Col. Nathan Jessup,” writes The Hollywood Reporter. “His résumé also includes the primetime series The Cosby Mysteries, Kate & Allie, Trapper John, M.D.,The Equalizer, Law & Order, L.A. Law and Tales From the Darkside and the daytime soap One Life to Live.”

Straczynski wrote, “I regret that I must convey the sad news that Michael O’Hare passed away today. He suffered a heart attack [last] Sunday and was in a coma until his passing this afternoon. This is a terrible loss for all B5 fans and everyone involved with the show wishes to convey their condolences to the O’Hare family. He was an amazing man.”

That was posted on Friday with a follow-up yesterday from O’Hare’s brother Mark after seeing the flood of fan comments:

Sorry all I must admit I am not a Facebook user. This was just shown to me. I want all of Mikes friends and fans a like to know that our family very much appreciates and thank you for all the kind thoughts and words. He was not only my brother but a great friend who I will miss terribly. I can tell you he loved life his craft and being on B5 and all those associated with the show from creator, cast, crew and fans. This all happened so fast it is still a blur to us. This past Sunday he had heart attack. The hospital did every thing they could to save him. Unfortunately it took some 50 minutes to revive him. Though we knew this to be a very long time and feared the worse. We still hoped and prayed that just maybe he could some how pull through. But in the end it just was not to be. It is just so sad the way it turned out. He just never came out of a coma and when he was declared in vegetative state with no more than once percent of brain functions. We the family were just heart broken. We knew mike would never want to go on with this so we entered him in Hospice for a peaceful and painless passing. Mike will now be reunited with his younger brother and sister whom we lost a while back. So we the family is comforted to know he will be with them again. Again thank you. Mike I am sure is smiling down knowing that he was able to touch so many with his craft. God Bless.

Babylon 5 is one famous sci-fi show I’ve yet to watch but I’ve heard good things. Were you a B5 fan?