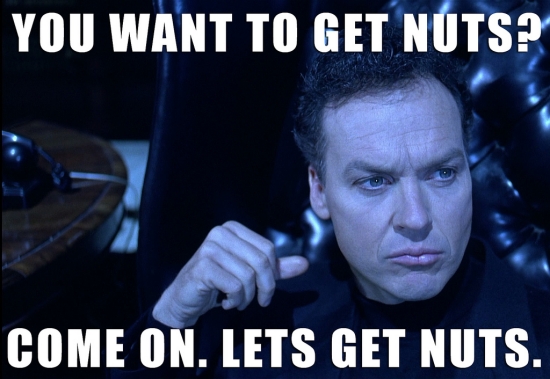 WTF with Marc Maron is one of the most popular, and best, podcasts on the Internet. It’s on the radar of most comedy geeks, but Maron interviews people from a few different worlds, including the world of Hollywood. The latest episode features an interview with Michael Keaton, who many forget started as a comic, and the two talked about Batman, Beetlejuice, and Keaton’s role in the upcoming Robocop reboot.

Most episodes of WTF run about an hour, but this one is nearly twice that at one hour and 47 minutes. It makes sense considering Keaton’s  long career. There’s a lot to talk about. As ever, Maron starts off by talking about the early career of whoever he’s interviewing. Depending on how interested you are in hearing about Keaton’s childhood and early work, there’s a lot of good stuff in the first hour, but most of what I’ll call “the good stuff” as far as geeks are concerned, happen in the second half of the interview.

A lot of time is spent talking about Beetlejuice, and how Keaton got involved. He had met with director Tim Burton a few times about playing the title character, but almost walked away because he didn’t understand what the movie, or even the character, was really about. Something Burton said in one of their meetings stuck in Keaton’s mind and kept him interested enough to do it. He doesn’t remember the exact quote, but said it was something like, “He [Beetlejuice] probably lives in all times. He’s from no time. He’s from every time. He lives in every time period.”

Keaton even helped solidify the character, particularly where wardrobe was concerned, from what he said was a pretty nebulous idea. Beetlejuice’s teeth, moldy skin, and hair were all ideas Keaton brought to the table. The two enjoyed working together enough that when Burton was offered Batman, Keaton was the person he approached.

Before the 1989 film version of Batman came out, most people were not as familiar with the character as today. Keaton was no different. He’d heard of Batman, and seen the Adam West television version, but Burton gave him a copy of The Dark Knight Returns and said that was the Batman he wanted to do. It got Keaton’s interest, because The Dark Knight Returns is amazing.

Keaton also talks about why he left after two movies. He claims he wanted to do a movie closer to Batman Begins and deal with the origins of the character, but Joel Schumacher wanted do, well, whatever Batman Forever was supposed to be.

When they got on the subject of the upcoming Robocop reboot, where Keaton plays the character of Raymond Sellars, head of Omnicorp. Keaton says he based the character off industry leaders like Steve Jobs and Richard Branson, and insists he’s not a villain, just someone with an opinion at odds with the hero.

Maron repeatedly refers to Keaton as his favorite Batman, and Keaton’s performance certainly wasn’t the worst thing about the Tim Burton films. It’s been a few years since I’ve watched Batman and Batman Returns, but after listening to Keaton talk about them, I’ll probably go back and check them out this week.

You can listen to the full interview here, and catch new episodes of the show every Monday and Thursday.

(via WTFpod.com, image via The Seven / Seven Corporation)