Michael Bay Would Like Theaters to Blow Out Their Projection Bulbs, Please-and-Thank-You 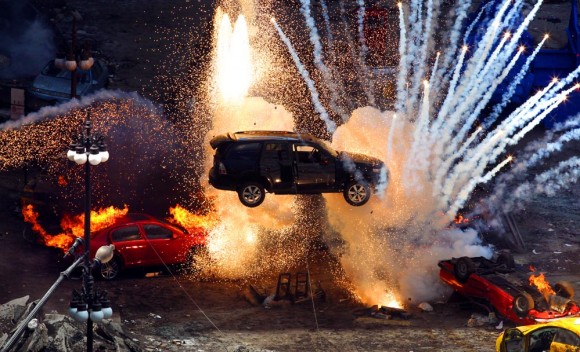 Michael Bay likes his special effects. But more importantly, he likes his special effects to be presented in the utmost quality. And now, he is politely asking projectionists in the movie theaters that are playing Transformers 3: Dark Side of the Moon in 3D to kindly brighten the bulbs used to project the movies to a level that will cause them to burn out faster. This will improve the viewing presentation of his films, and will only cost theaters a few thousand dollars to replace the bulbs. You know. Just do him this favor, guys. Spend a few extra thousands of dollars for Transformers 3.

It has long been said that a lot of 3D movie presentations appear a bit dim and muddled. This is because the bulbs used to project the movies are already working overtime with the 3D effects that they are not as bright as they are for a regular movie. According to Entertainment Weekly:

Why would a theater be reluctant to pump up the wattage? It’s because the bulbs can average around $3,200 or run as high as $5,700 and burn out after about 500 screenings, which adds up quickly at a multiplex. Keeping the bulbs dim may lengthen their lifespans slightly, though film critics routinely complain it’s not worth it if that lifespan is full of muddy, underlit movies.

But since people are losing their taste for 3D movies after every single movie felt the need to try the gimmick, is it really worth it? Michael Bay sure thinks to. He has been campaigning all week ahead of the release of his latest movie, asking theaters to brighten their projection bulbs to ensure the highest quality 3D presentation. Here is his letter, sent on Paramount letterhead (click to enlarge): 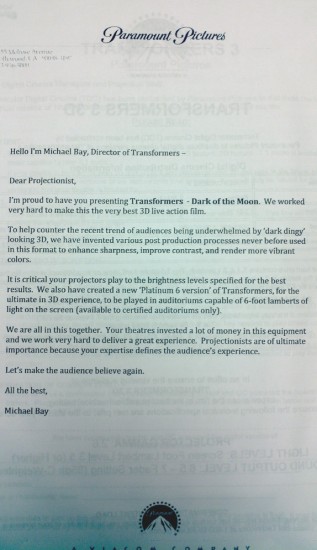 We are all in this together. And after theaters go broke spending the extra cash to replace their bulbs, Michael Bay will send them a basket from Edible Arrangements for their troubles.

This is a change from what Bay usually has to defend — his narratives. But generally speaking, his movies are still box office successes. (The first Transformers film brought in $710 million globally, $836 million for the sequel.) And if all his talk about this has-to-be-seen-to-be-believed level of 3D effects gets enough people curious, maybe theaters will break even when everyone springs for the extra bucks to see this insane exploding robot madness.