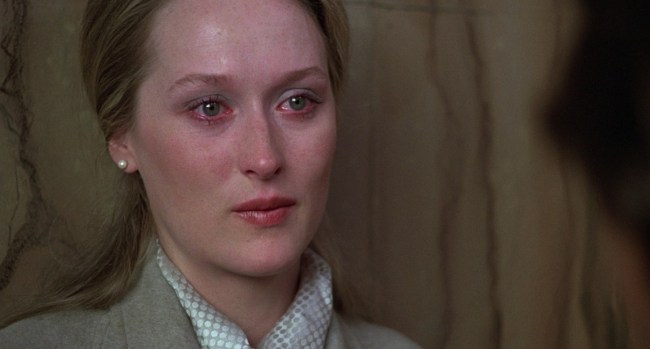 Over the last few months, multiple women have come forward with accusations of sexual harassment and assault perpetrated by Dustin Hoffman at various times over his lengthy career. But stories about Hoffman aren’t entirely new. A few years ago, Vanity Fair published an adapted segment from a biography of Meryl Streep, whose first leading role in a film was opposite Hoffman in Kramer vs. Kramer.

Hoffman is known for his dedication to method acting. There are stories of him torturing himself for roles, but by this account, he also allegedly takes it upon himself to torture his costars. According to the biography, Becoming Meryl Streep, on the second day of shooting, Hoffman and Streep were behind a door, waiting for their cue to enter. Just before their entrance, Hoffman reportedly slapped Streep hard across the cheek.

That wasn’t the only time Hoffman used atrocious methods to elicit the performance he wanted from Streep. (I know this was early in her career but still, imagine the gall of thinking Meryl Streep needs your help delivering a great performance.) In an emotional scene where Streep’s character, Joanna, leaves her husband, Hoffman attempted to manipulate Streep’s performance by going off-script. Standing offscreen while the camera was on Streep, rather than supply his side of the scene’s dialogue, he allegedly started “taunting” her with talk of her boyfriend John Cazale, who had recently passed away after being diagnosed with cancer. According to producer Richard Fischoff, “He was goading her and provoking her, using stuff that he knew about her personal life and about John to get the response that he thought she should be giving in the performance.”

Those stories are disturbing accounts of workplace abuse, and they stuck with me when I first read them, but as far as I know, Streep has never addressed them. (She has addressed an old interview in which she said the first time she met Hoffman, he grabbed her breast, saying it was not an “accurate rendering of that meeting.”)

Now, in an interview with the New York Times, she confirms that the slap did happen.

That was when we were making Kramer vs. Kramer. This is tricky because when you’re an actor, you’re in a scene, you have to feel free. I’m sure that I have inadvertently hurt people in physical scenes. But there’s a certain amount of forgiveness in that. But this was my first movie, and it was my first take in my first movie, and he just slapped me. And you see it in the movie. It was overstepping. But I think those things are being corrected in this moment. And they’re not politically corrected; they’re fixed. They will be fixed, because people won’t accept it anymore. So that’s a good thing.

That difference between being “politically corrected” and actually “fixed” is key. One is appeasement; it’s a reshuffling and a sweeping under the rug until attention refocuses elsewhere and things can return to normal. It’s maintaining the status quo with superficial bandaids. The other is real, lasting change.

Streep and Tom Hanks, who was also being interviewed, also talked about the current sexual harassment reckoning and the culture that facilitates it. While Hanks says he was never knowingly complicit, he was “oblivious” to the culture that breeds a devaluing of women. He says he has “participated in crude humor worthy of a baseball locker room on a set.”

To which Streep rightly responded, “There shouldn’t be the idea of a locker room. The payload is unloaded on women, because that’s the last group it’s kind of O.K. to demean, degrade.”

Finally, Streep is still being asked to answer for her connections to Harvey Weinstein, and what she knew or willingly ignored. When asked what she thinks of the people that are waiting for her to speak about these things, she deflected.

That’s frustrating. While Meryl Streep is in no way responsible for the actions of Weinstein or other sexual predators, it’s naive to think that she doesn’t have a powerful voice in this situation. I’m grateful that she’s speaking about her experiences now. A woman like her, with so much prestige and a career that has lasted decades, has a privilege many women don’t: the power to be heard. She’s more respected in a lot of circles than, say, Ivanka Trump. So I think it’s perfectly reasonable to want to hear about the silence of her.