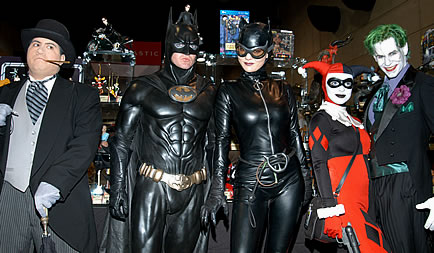 Were you one of those kids in school who was made fun of for what you liked or how you looked? Remember the sick feeling you’d get in your stomach when that one jock would round the corner and you just knew to expect the worst? Say hello to New York Comic Con cosplayers and Men’s Fitness. One of the magazine’s reporters, Jordan Burchette, attended the pop-culture convention this weekend to post photos of unsuspecting cosplayers and make fun of them. And here we thought conventions were a safe zone.

I’m not going to link to the actual article because I don’t want to them getting any more hits for their nerd-baiting but needless to say, that’s exactly what they’re doing. Michael Tresca, a reporter for the Examiner, brought the atrocious behavior to everyone’s attention.

There’s no way you could know what awaits you in the original piece with an intro like this:

Comic book conventions are among the few remaining refuges of sincere, unaffected fun in an otherwise odious leisurescape of extreme binge drinking set to techno or gun claps. They’re enjoyed by people of literally every age, ethnicity and economic disadvantage in celebration of the stories and characters on which they were all raised. It’s a bully-free zone in which underwear is in no danger of violently wedgie-ing its wearer and freak flags are free to fly. Nowhere is this more evident than in the practice of costume play, or cosplay.

Sounds like any other celebration of conventions, right? Wrong. Burchette continues:

This year, attendees all appear to have colluded in advance to imagine the most popular heroes and villains of comics, movies and anime as doughy, sickly, weak, infirm or, in the most impressive examples, morbidly obese. What we observed was a testament to the imagination and resourcefulness of the comic book fan, a live “What If?” comic, if you will, contemplating how our heroes would look close to death.

Wow. Just…wow. Burchette goes on to post photos he took of several cosplayers and write captions underneath that range from snarky to downright insulting. Under a shot of a Star Wars bounty hunter, “Jeez, they’ll clone anyone into a Fett these days. Hey, Blob o’ Fett, there’s a bounty out on a granola bar if you want the collar.” By a slim Iron Man cosplayer, “Tony Stark, a.k.a. Iron Man, finally dying from the nuclear reactor in his chest.” The author even had the nerve to take a shot at real New York City police officers, “Tubby Hawaii Five-0! Brilliant!!!”

It kind of makes me sad for Burchette. It seems that he never grew up. Why exactly did this reporter attend NYCC? It can’t have been just for this article, he could have stood outside and took pictures of cosplayers if that was the objective. That leads me to believe that Burchette had interest in at least one aspect of the con and if that is the case then what gives? Unfortunately, this isn’t the first time he’s done such a thing either. He wrote a similar piece for Maxim in 2008.

Nicole Wakelin wrote a great piece for Geek Mom entitled, “In Defense of Cons and Cosplayers.” In it she writes, “If you’re a geek or a nerd or whatever you want to call it, then you’ve likely been dealing with guys like this your whole life. He was the one who looked down on you for no other reason than that you were being you. Your hair was wrong. Your jeans were wrong. You were too smart. You liked the wrong movie. You hung out with the wrong crowd. The reason doesn’t matter because no matter what you do ‘this guy’ is always out there ready to rain on your parade and ruin the fun. But we’re not kids in high school anymore. We’re adults and these cons belong to us.”

I never gave too much stock to Men’s Fitness before (being a lady and all) but mine and other peoples opinions have certainly been lowered as to their legitimacy as a news source. Several people are calling for a boycott of the publication and I don’t blame them. A magazine that would that would willingly post an article making fun of individuals who were in their comfort zone and having a great time is despicable. Just like the entirety of the population, cosplayers come in all shapes and sizes. Going to an event meant for celebration and turning it into a high school campus shows us you never left school. We have and we’re happy where we are now, are you?