Surprise! New Survey Says Both Men And Women Are Into Genre Films 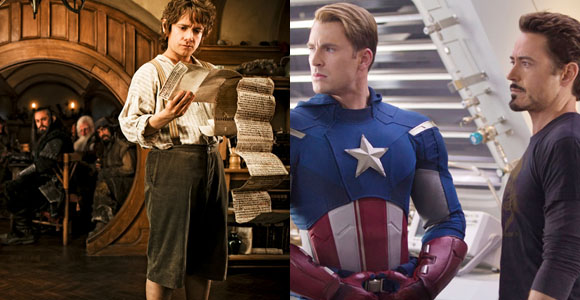 During the first few weeks of December, Fandango.com posted a survey asking moviegoers what their most anticipated films were for 2012. The results are in and turns out, there isn’t as much gender disparity as you’d think. Read on to find out which films men and women named.

Here are the most anticipated blockbusters according to Fandango.

According to Men:
1. The Hobbit: An Unexpected Journey
2. The Avengers
3. The Dark Knight Rises
4. The Bourne Legacy
5. Men in Black III

According to Women:
1. The Twilight Saga: Breaking Dawn, Part 2
2. The Hunger Games
3. The Hobbit: An Unexpected Journey
4. Dark Shadows
5. The Avengers

And when asked which remake they were most looking forward to…

According to Men:
1. Total Recall
2. The Amazing Spider-Man
3. The Great Gatsby
4. Snow White And The Huntsman
5. Mirror Mirror

According to Women:
1. Snow White And The Huntsman
2. The Great Gatsby
3. Mirror Mirror
4. Total Recall
5. The Amazing Spider-Man

It doesn’t come as a surprise that the majority of men respondents don’t care about Twilight but besides their inclination toward the next Bourne film in the blockbuster category, men and women are both really interested in genre films.

In our recent reader survey, we asked what upcoming movie release you were excited about and well, obviously we’re a nerd site but our top results were…

Twilight and Dark Shadows were among the lowest.

Men:
1. The Avengers
2. The Dark Knight Rises
3. The Hobbit
4. The Muppets
5. The Adventures of Tintin

Twilight and Men In Black 3 were among the lowest with them.

But it’s good news for us geeks who want to see more sci-fi and comic book films in theaters and hopefully Hollywood will take notice. The creators of John Carter recently went through a series of name changes on their film to make sure it didn’t turn off either men or women. Perhaps Hollywood will see this and realize they don’t need to subscribe to the school of thought that men and women like opposite things.