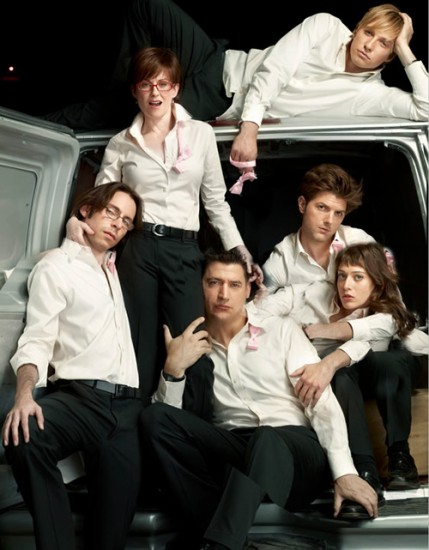 One of the better “awkward workplace comedies,” Party Down, originally aired on Starz and only lasted two seasons, so you may not have heard of it — though each new episode did release on Netflix Instant the night it aired on Starz thanks to a sweet deal Netflix had once upon a time. It was fantastic, so it got canceled, because that’s frequently how that goes. Former casty member Megan Mullally, however, recently confirmed that the series will continue on in movie fashion, similar to Firefly and Serenity, and the movie will pick of where the season two finale left off. If you like things that are funny, this is good news.

The cast features a bunch of prominent funny people, including Adam Scott (now on Parks and Recreation), Ken Marino (most notably from The State), Lizzy Caplan (True Blood and the goth friend in Mean Girls), Martin Starr (a Judd Apatow frequent), Ryan Hansen (Veronica Mars) and the newsbreaker herself, Megan Mullally (Will & Grace and one of Ron Swanson’s ex-wives). They play a group of struggling actors and writers who have to fall back on catering while they try to break it big, except for Adam Scott, who became relatively famous for a catch phrase  (“Are we having fun yet?”) in a beer commercial, which also killed his career.

At the Television Critics Association winter press tour, Mullally confirmed that the movie is currently being written by series writer John Enbom, and also confirmed that the entire cast will be coming back for the movie, possibly excluding Jane Lynch, who was a cast regular in season one but was replaced by Mullally in season two. Mullally also said she believes the movie will pick up where the season two finale left off, which is great news for fans. She also said filming will begin in late spring or early summer of this year, which is more great news.

Obviously, we’re excited here at Geekosystem, and no one need ask us in a loud tone if we’re having fun yet.

(story via The Hollywood Reporter, title pic via BuzzFeed)

Relevant to your interests in having fun yet