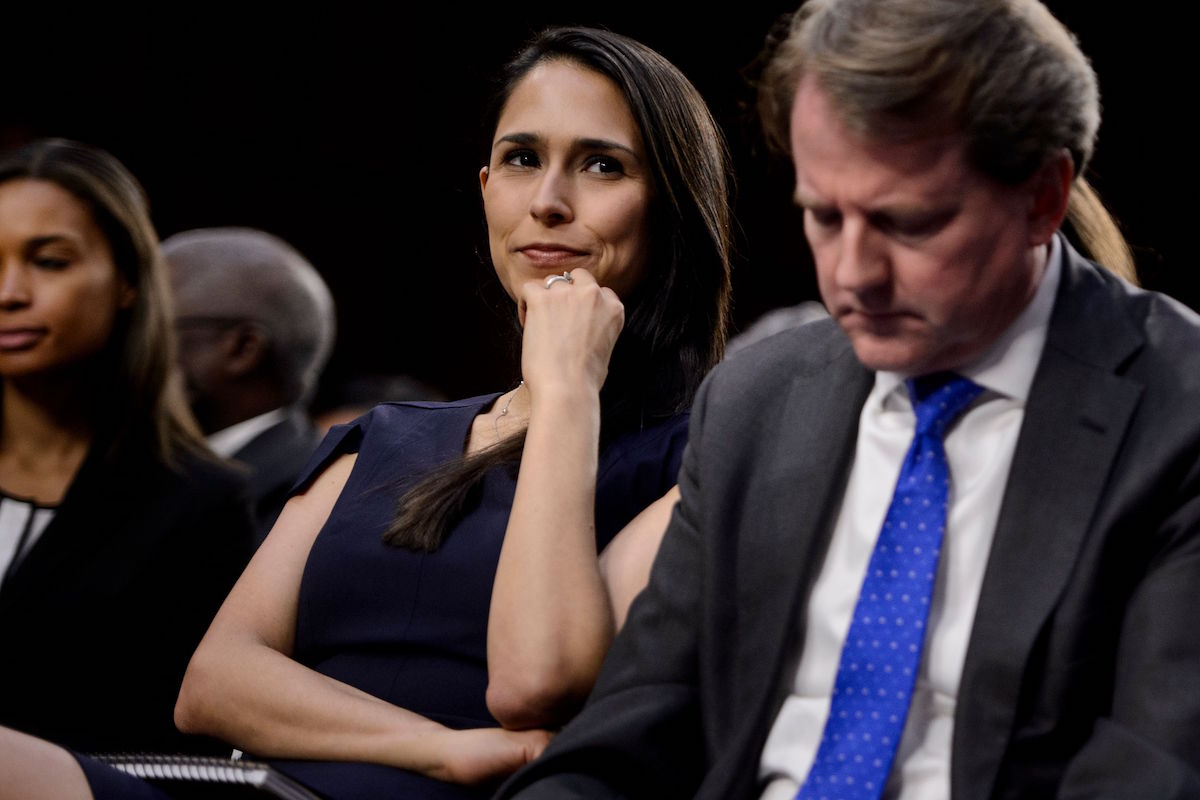 The Senate hearings for SCOTUS nominee Brett Kavanaugh began Monday and they were met with an unprecedented number of protests. Many of the protests yesterday and leading up to the hearing have focused on Kavanaugh’s expected and established stance on gun issues and women’s reproductive rights. The Senators questioning Kavanaugh were continuously interrupted as vocal protestors were led out of the hearing room. It was what Senator Dick Durbin dubbed “the noise of democracy.”

But those watching the hearings from home also took notice of another distraction: a woman sitting directly behind Kavanaugh, who spent much of the first day smugly smirking when Democrats spoke.

But at some point, she appeared to take the turn from smug to full white supremacy.

Who is she? What’s up with the white power sign? @MSNBC pic.twitter.com/VUU9QsFdXW

That woman, as it turns out, is Zina Bash, and she isn’t just any ol’ apparent white supremacist. She’s an apparent white supremacist on Kavanaugh’s payroll. Bash has worked (inconsistently) for Kavanaugh since 2007, when she first served as his law clerk. In the time since, she’s also worked on Ted Cruz’ 2016 presidential campaign as well as for Senator John Cornyn and the Texas Attorney General. She’s also served as a Special Assistant to Donald Trump, focusing on immigration policy–a department headed by ultra-racist Stephen Miller.

A few other fun (not actually fun at all) facts about Bash: She’s described as being “ridiculously rich” and her father made a documentary called The Hoax of Man-Made Global Warming. See? Fun!

Bash’s husband has vehemently denied that Bash’s hand signal was deliberate. For those who are skeptical, I encourage you to try mimicking Bash’s posture for an extended period of time and see how casual, how natural it feels. For most, the answer will probably be: not very.

Here’s a look at the whole video, in which she appears to receive a text message before putting her hand in that position:

.@RogueUSMint show the whole video – she first receives a text message. Then she flashes the #DogWhistle while looking around at cameras pic.twitter.com/M22hdxlr9X

As for what the sign means, it originated with 4chan trolls and has since been adopted as a symbol of the so-called “alt-lite”–racists, anti-semites and misogyninsts who may not engage in violent acts but see those ideals as a form of trolling and are complicit, if not fully driving, the normalization of bigotry.

Here is Mark Pitcavage of the Anti-Defmation League on the history of the ‘OK’ hand signal that White House advisor Zina Bash is quite immaturely and purposely flashing behind Kavanaugh at this hearing. Just vile. https://t.co/8kIoaKEZNw

Bash is not merely a former employee of Kavanaugh’s; she is currently serving on his confirmation team and no one gets placed behind a SCOTUS nomination for the entirety of a day-long hearing by accident. That’s not to say that Kavanaugh was aware of or endorsed her choice to flash this sign, but he was aware of and endorsed her.

We’ve known that this is the sort of person Trump brings onto his staff. And, as multiple senators reminded us during Monday’s hearing, Kavanaugh is a Trump pick through and through. Trump told us that he had strict guildelines for what sort of nominee he would choose for the Supreme Court, and that he expected a specific agenda from that person. Kavanaugh fits that agenda, from his stance on Roe v. Wade to his stated opinion that Presidents can’t be charged with crimes. Why would we be surprised that Kavanaugh further fits the mold of a Trump pick in that he places telegenic white supremacists next to him for all the world to see?