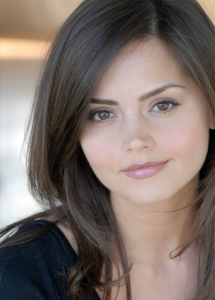 The news is out, and we now know who will step into the TARDIS with the Doctor after the Ponds’ journey comes to an end. British actress Jenna-Louise Coleman has been chosen as the Doctor’s new companion, her first appearance coming just as the show winds up to its landmark 50th anniversary. Coleman beat out “hundreds” of other actresses for the role, and Steven Moffat says that she is the perfect match for Matt Smith‘s 11th Doctor: “It’s not often the Doctor meets someone who can talk even faster than he does, but it’s about to happen. Jenna is going to lead him his merriest dance yet. And that’s all you’re getting for now.” Oh, really? Not even her name? … Actually, no, we still don’t know what her character’s name is. But we can tell you more about Jenna-Louise Coleman. Come inside! Meet us in the immediate future, right after the jump!

The BBC is touting Coleman’s casting as a very big deal, mainly because of the aforementioned 50th anniversary season that will air in 2013. However, her introduction will follow what is being described as a “heartbreaking departure after one final series of rollercoaster voyages,” referring to the final season with Amy Pond (Karen Gillan) and Rory Williams (Arthur Darvill). So, basically, Steven Moffat is going to trap us all in the TARDIS, turn the TARDIS into a glass case of emotion, and then allow us — and the Doctor — to pick up the pieces with this mysterious new companion. Mysterious? That’s what Moffat tells us:

“Who [Coleman is] playing, how the Doctor meets her, and even where he finds her, are all part of one of the biggest mysteries the Time Lord ever encounters. Even by the Doctor’s standards, this isn’t your usual boy meets girl.”

The announcement came in a series of tweets from the official Doctor Who account, one of which stated that Coleman’s character would be introduced in her inaugural season’s Christmas special. A few more details were revealed via Twitter, including how Coleman had Smith trying to “keep up” with her. Another rather crucial one? Here comes your spoiler text, and you have been warned: Moffat says that Amy and Rory will leave us “in a final encounter with the Weeping Angels in ep 5. Not everyone gets out alive and I mean it this time.” Spoiler text ends here.

So, what about Coleman? Why we don’t know her character’s name yet, we do know a bit about the woman herself. She is best known for her roles on the British soap opera Emmerdale and the BBC drama Waterloo Road. On the big screen, she had a role in Captain America: The First Avenger (IMDb says she played “Connie”). Across the pond, she will soon be featured in roles in ITV1‘s Titanic series (as Annie Desmond) and Dancing on the Edge for BBC2. She offered the following statement on her newest role, sure to be her biggest to date:

“I’m beyond excited, I can’t wait to get cracking; working alongside Matt I know is going to be enormous fun and a huge adventure.”

Welcome aboard, Jenna-Louise Coleman! Get ready for everyone to have incredibly mixed feelings about your new character, and then, most likely, fall deeply in love with you.

Now — how many incarnations of the Doctor will she be traveling time and space with?

ETA: Here is a video interview with Coleman:

(via The Doctor Who Official Tumblr, BBC America)