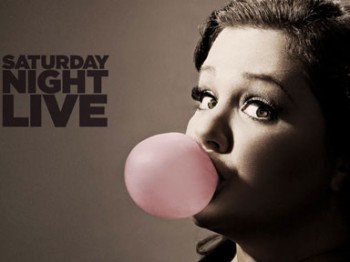 The reviews are pouring in for Melissa McCarthy‘s hosting gig on Saturday Night Live last night, and they are a little crazy. In a good way. Generally, this time of the year, SNL‘s ratings drop off after the season premiere. This year, the ratings went up, by 4%. That’s a pretty big deal. Especially considering that the season premiere was hosted by perennial favorite — and now hosting record holder — Alec Baldwin. And if you’re wondering if McCarthy was a shrinking violet of a host, playing a lot of straight parts and letting the cast get the laughs, you’d be greatly mistaken.

In short, Melissa McCarthy brought it. Not only was she funny, but she was doing characters, something usually reserved for the cast members. And you couldn’t call these characters traditional or stereotypical, either. They were pretty out there. The spotlight was on McCarthy every time she was on the screen (she was not featured in the Digital Short nor on Weekend Update), and it was a blast to watch. She was all over the place (in a good way), made a huge mess, fell down stairs … it was awesome. It was also actually funny, and that was the best part.

McCarthy started in the cold open, which is always a pleasant surprise because usually the host has to scurry right into their monologue. But if they’re ready and willing to do a character in full costume and then snazz themselves up for the monologue, that’s a good sign that the host is at the very least very excited to be there. (Sometimes, that’s half the battle. Personally, I feel like if the host is at least happy to be there and eager to participate, they get a lot of credit for trying, even if the sketches aren’t that great.) But McCarthy went from the classic Lawrence Welk sketch — in which she played another freaky sister alongside Kristen Wiig‘s regular freaky character, Junice, with the tiny hands — into her dance-filled monologue. Well, almost. She generally stopped short of dancing. (By the way, Bobby Moynihan can totally tap dance!)

From there, she played her second character of the night, Arlene, who is terrifyingly horny for her coworker (Jason Sudeikis). This featured McCarthy using her live, real time screen time to pop a bunch of balloons, which was a risk that paid off. Another character, Linda, part of a focus group testing new Hidden Valley Ranch flavors, was another opportunity for her to just let loose as another overenthusiastic weirdo, and, no exaggeration, splash ranch dressing all over her face. It was a mess. It was unapologetic. It was what we want to see when a host with a comedic background shows up.

Then there were the sketches that cast McCarthy as non-freaks, as real, live semi-normal people — who were also sexual beings, which is a really awesome thing to see when the woman playing these characters is not your typical Hollywood starlet. There was her Mae West-inspired character, Lulu Diamonds, who had a tendency to fall down the stairs. She was gorgeous, she was sought after by three (“closeted gay”) men. But she was clutzy, and that eventually resulted in her (offscreen) death. The last sketch of the night actually featured McCarthy as a straight character who still got to tell jokes. While she sat solo at the bar, Andy Samberg played a guy who was hitting on her, assuring her that he’s great in bed while a bevy of women came by — in person — to formally complain about his lovemaking skills, or lack thereof. The best part of this was that her character got to be funny, too, turning the role of “straight” on its head and leaving McCarthy and her costar evenly matched. For me, that’s the worst — when a host shows up, they’re not game to make a fool of his or herself, and they just play straight roles and let the cast get the laughs. (I’m looking at you, January Jones.)

Other sketches were also nothing to sneeze at, like the Comments Section talk show, which exposed the trolls who make stupid comments on the Internet. (Don’t worry, not you guys. We love our commenters at The Mary Sue.) The Digital Short, which pitted Stomp (??) against Blue Man Group (??) was one of those shorts where you really have no idea what’s going to happen, and then it’s weirdly wonderful.

This was a great moment for women in comedy, and it paid off for SNL in the end. Not only were their ratings higher than last week, but they were 8% higher than they were this time last year. Anyone still want to say that women aren’t funny? … No? Didn’t think so.

There was also this:

(via Deadline, video clips from SNL on NBC.com