Mayim Bialik Wants to Rub Lotion on Superman for Science

She's the only woman Gillette asked about Superman's beard, so Mayim Bialik took some extra creative license with her theory. 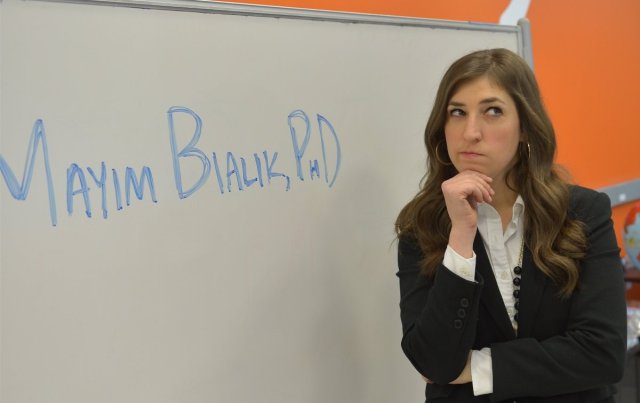 Gillette really wants to know how Superman shaves his beard in Man of Steel, and they’ve turned to some of the best minds in geekdom to figure it out. One of those minds belongs to The Big Bang Theory’s Mayim Bialik. She happens to be the only woman they asked about Superman’s shaving habits, but she’s also the only one who earned her PhD. Take that, gentlemen.

Bialik’s theory and video stand out in a few ways. She’s the only woman in the series. She’s the only one with a PhD — Our friend Bill Nye has three doctorates, but they’re honorary — and she sort of presents her theory in character, and really sells her idea as fact. Take a look:

Glen Tickle: Mayim, it’s great to be able to talk to you about how Superman shaves. What I thought was interesting about you video in particular is that you kind of did it in character. You talked about research into Kryptonian genetics, and it seemed like you were doing it from the world of the movie as opposed to all the other guys who were just speculating.

Mayim Bialik: I was sort of playing an exaggerated version of myself. Obviously they didn’t want Amy Farrah Fowler doing it. They wanted me to be doing it. We kind of thought it was fun to be playful about it, but I think also because I’m the only female I got to give it a little bit of a theatrical flair. I think also because I’m the bona fide neuroscientist we felt like we had a little creative room as well to be sort of playful about it.

Your background’s in neuroscience. I don’t think there’s any way to spin that directly into shaving.

Actually the way that I came up with this theory is that one of the classes for I TA’d three times for was “The Anatomy and Physiology of Sense Organs,” and one of the sensory systems that we did was touch receptors and skin. So, I actually used my neuroscience training in understanding of the hair follicle to come up with my theory.

Kevin Smith used the fact that he wrote a Superman script in the past and has done comics for a while as his qualifications, and Bill Nye was relying on his mechanical engineering background, but being a teaching assistant for Anatomy and Physiology a few times seems like pretty solid qualifications.

Yeah, I think they’re pretty good as well, and I’m a neuroscientist. We’re trained to have a pretty good understanding of lots of aspects of the human body and experience.

The one thing your theory does sort of fall short of doing is saying more about the enzymes that would denature the proteins.

What do you want to know?

I mean, obviously since it’s about shaving a fictional character there’s only so specific you can get, but in the video when they did the animation for the enzymes they made them green. Are we supposed to believe it’s somehow derived from kryptonite?

[Mayim takes a few seconds to laugh, presumably at the ridiculous nature of this question.]

I think that might be artistic license. Most everything in the body or brain is either gray or pink, so… [She trails off laughing at my silly question.]

Does the lotion just make it easier for Superman to shave or is it sort of like a Superman Nair where it just makes the hair fall out or dissolve?

I wasn’t sure if Gillette had an equivalent product.

Well if [the lotion] is going to be created Gillette would probably be in charge of that.

It helps him pull the hair out, and he’s not really cutting it?

He’s not really pulling it. The idea is that the follicle has been released so that it just sort of comes out. Picture a splinter that is barely, barely in. You know? When you kind of brush it off.

What did you think of the other theories that everybody came up with? Obviously you would think yours is the best.

If you had to rank them —

Oh, gosh. I don’t want to rank them. I think we all have very good nerd and comic book credibility, but I like being the only female. I get to give it my own flair, and my neuroscience flair I think makes mine special.

I think yours really does stand out from the group. I don’t know if you know this, but Bill Nye actually played a superhero on a show called Almost Live —

That’s the best piece of information I’ve heard all morning.

He played a superhero called The Speedwalker. His superpower was that he could walk fast according to the rules of the International Race Walking Association —

Do you have any theories on how The Speedwalker would shave?

Very carefully and with a Gillette razor.

That might be a better answer than Bill gave me yesterday.

It seems like there’s been — I don’t want to say “backlash” because it’s too strong of a word, but a lot of people have commented on the videos specifically referencing the John Byrne laser-vision-into-mirror method of Superman shaving. Bill said you were all told specifically not to worry about that. Did they bring it up when they asked you to do this?

Well honestly, when Gillette approached me I spoke to Bill Prady, our co-creator and executive producer [of The Big Bang Theory], and I said to the folks at Gillette, “There are theories.”

They said, “Yeah yeah yeah. We want your theory. What is your theory?”

Growing up in sort of a comic book culture I wanted to be sensitive to that, but I think that’s also part of the beauty of Man of Steel. He’s recreating himself. Not just from unshaven to shaven, but this is sort of the development of a different aspect of his character.

The film’s an adaptation. Fans can’t expect it have everything from the comics.

Exactly, and I think that’s important to remember. As serious as we comic book people can be there’s still room for a lot of flexibility and creativity. It still is sort of the art of the comic book.

Have you seen Man of Steel?

I have not, but as I’ve said to many interviewers, when I saw that trailer I cried, and that’s a true story.

It does look pretty epic, but I haven’t seen it either. I’ve been told that they don’t address it in the movie. He sort of goes into the Fortress of Solitude and comes out without a beard.

Well that’s what HowDoesHeShave.com is for.

If they go back and insert that scene for the DVD release, or —

You could be the scientist developing the lotion, or —

I would like to be rubbing the lotion on his face.

You can rub it into his beard.

This is why I’m the female on the panel, so I can say stuff like that.

How does Superman get the lotion?

What are my choices? He gets it from the Gillette store on Krypton.

I don’t think it survived the explosion.

That’s not true. I just made that up. It’s the only thing that survived.

He just flies back to Krypton, and gets some lotion?

Totally. I just recreated it.

My theory on it would be that he can just go to a planet without a yellow sun and shave regularly.

Uh huh. I’ve heard that, or the City of Kandor.

That’s how I would do it if I were Superman.

Next time Gillette calls you, you can give your theory, my friend.

[Editor’s note: Gillette, I am available to discuss any and all superhero shaving and hygiene habits for any future campaigns.]

I am not Superman, and I like my beard where it is. Though Gillette did give me a razor after one of the other interviews if I ever do decide to lose the beard.

85% of women would prefer that you do.

No! We just had a study on Geekosystem that said beards make you more attractive.

I don’t know about that. I’m denying that.

I’ll send you the link. It wasn’t my article. I just took the headline and felt confident in my beard.

That article got destroyed on Krypton.

When I talked to our friend Bill Nye I got him to agree to let us call him “our friend Bill Nye” in articles, but I forgot to ask Mayim the same question. After typing the interview I noticed that she called me “my friend” at one point, so I’m assuming it’s reciprocal. I had a really great time speaking with Mayim about Superman’s beard. If you ever get the chance to do the same thing, I highly recommend it.

In her video she mentions that the lotion makes Superman smell really good, but I ran out of time before I could ask her what it smells like. I’d love to hear your theories in the comments.