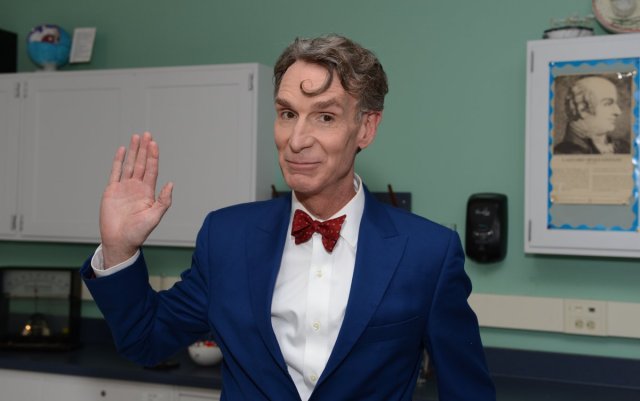 Bill Nye is a national treasure. He’s who I’d imagine Superman would actually turn to in order to solve a problem like shaving, so it’s a no-brainer to see him included in the Gillette campaign to figure out how the Last Son of Krypton loses his beard in Man of Steel. I had the chance to speak with him about his scientific approach to Kryptonian shaving, and then we became friends.

If you need a refresher on Nye’s theory about Superman’s shaving habits, take a look at his video from Gillette:

Of the four theories, this one seems the most grounded in real world science. We already grind things down with materials stronger or weaker than what we’re grinding. In my interview with Kevin Smith about his theory, I called his the “most plausible,” meaning the one I think Superman would most likely use.

If I’m Superman, and I’m presented with the option of making a razor from a piece of my ship, or grinding the beard off my face — I’ll take the space razor. Nye’s theory is scientifically sound, but Smith still called it into question.

Glen Tickle: I spoke to Kevin Smith about the campaign yesterday. He actually brought up the point that although your grinding theory seems like it would work, you fall short of actually saying what the material would be that would grind Superman’s beard down.

Bill Nye: You want me to comment on that? Is that what you’re saying?

I wanted to see if you have a specific material in mind that Superman would use.

Well I imagine the material exists at the Gillette company, but let me point out that you can grind materials to shape them with something that’s not any harder than the material you’re grinding.

Here’s one of the old questions in what I will call, “Materials Science.” A machinist might call it their job. If you have a concrete road, the concrete is substantially harder than the rubber tires that run on it, yeah? So why would a concrete road ever wear out?

So you’re saying it doesn’t have to be as hard as Superman’s beard?

It’s the nature of nature. How is it you’re able to polish a piece of a jewelry, a diamond, to an absolute or very very nearly completely smooth surface? Diamond is harder than anything else. How is that possible? How is it possible to file your nails with a nail file whose glue isn’t nearly as strong as the fingernails you’re filing? It’s an interesting thing.

I’m a mechanical engineer, and as I like to add I’m also human. When you’re involved in making things, when you’re a machinist, a fabricator, you routinely have to make stuff either by building it up — that is to say adding material, you pour plastic into a mold and you create a flying disc, a Frisbee for example — or, you know, all the rage the last few weeks is 3D printers where you add layer upon layer of material.

Or you remove material. You do that when you whittle a piece of wood into a ship. You use a wood lathe to make a baseball bat. In these cases you’re removing material, so a machinist routinely cuts, bores, mills, broaches, taps, or grinds. In a cutting operation in general, the cutter is much harder than the thing you’re cutting. When you have materials that have asperity, or roughness, you don’t necessarily have to have a material that’s substantially harder than the thing you’re shaping.

Furthermore, the remarkable thing about a grinding operation — you can for example take a nail file and remove the shell of an egg, but leave the membrane. It’s reasonable to me that Superman is able to remove his beard but leave his skin. He does have super skin for crying out loud. So this tool I’m imagining, this razor, would be let’s say the diameter of the tip of a ball point pen, or a fifth of the width of an electric toothbrush or something like that. It would grind his beard away, and who knows what’s possible if he is able to use material from his rocket ship. My goodness. I mean, then he could really get something done.

Let’s start with the world of Superman. We theorists or hypothesizers were constrained to work in his world. We were not allowed to use anything else from the lore or the canon of Superman like the heat ray bouncing off the mirror.

Yeah, the John Byrne thing had to be dismissed.

It had to be a self-consistent system as we say in mathematics. In the world of Speedwalker, although the guy is able to walk at extraordinary speeds while adhering to the strict rules of the International Race Walking Association, there’s nothing in there about his beard. I mean, as far as I can tell Speedwalker has a conventional beard. Jeff Bimmel, the reporter [Speedwalker’s secret identity] I think shaves every day out of respect for interviews.

[Editor’s note: Out of respect for my interview with Bill Nye, I did shave under my chin, and wore a bow tie — even though it was just a phone interview. The man’s a national treasure.]

I mean, he doesn’t go flying through coronal mass discharges of the Sun, or he doesn’t bore into the center of the Earth with his strength. He doesn’t blow over buildings with super breath. He’s just a guy that’s able to walk at extraordinary speeds.

So they dismissed the John Byrne laser-in-the-mirror theory, and the kryptonite razor.

Let me say that was specifically excluded. That was not a judgment call on my part.

I think you have to look at it in the world of Man of Steel. You can’t just go back to all the back catalog of Superman stories. I think yours is a very practical solution to a pretty ridiculous question since he’s a fictional character.

Well what makes it cool to me is there are rules. This guy is in this world. He’s got a lore. He’s got constraints in his physical world, his physical reality. What charmed me about the whole thing is you’ve got to use what Mr. Scott on the Star Trek Enterprise would say, “the laws of physics,” to make this come out right. It’s fun. I think it’s a worthy experiment.

I agree. It seems like everybody had a lot of fun coming up with their theories. I’m looking forward to see who comes out on top.

That’s as good of a reason to do anything as anybody needs.

As long as you remain responsible for your own actions and leave the world better than you found it. Some people might think it’s fun to damage stuff.

That’s a good caveat then.

Yeah. Those are the two constraints. Everybody’s responsible for his or her own actions, and leave the world better than you found it.

I think we can agree on that. Your video is currently in the lead for views, but I haven’t seen any of the voting results. Do you know where you stand in that at the moment?

Miles, can you help out here?

[Miles, presumably a representative for Gillette chimes in.]

Miles: He is number one still. As far as how many votes, we don’t have that tally yet, but he is leading.

I looked at the count before the call, and you’re about 200,000 views ahead at the moment.

I’ll remind everybody wherever you are, almost everything you can touch and see in your environment right there was put there by somebody who engineered it. Somebody with training in engineering is responsible for manufacturing just about everything. Even if there are potted plants in your field of view, they got there on trucks, or trains, or by means that were conceived and designed and brought into reality or made real by engineers.

So, I’m hopeful this thought experiment associated with a fictional superhero will lead to more engineers, and a more productive, safer, healthier tomorrow.

We should certainly hope so. You actually come up in articles on our site Geekosystem pretty regularly. Now that I’ve talked to you, do we have your permission to write it out as, “Our friend Bill Nye,” the next time it comes up?

I didn’t know you had to ask my permission. I mean I’m a public figure.

I just wanted to make sure.

So there you have it, everybody. Our friend Bill Nye says you have to be responsible for your actions, and leave the world better than you found it. It also wouldn’t hurt if you went out and thanked an engineer, or became one yourself.

It was really an honor to get to talk to our friend Bill Nye.