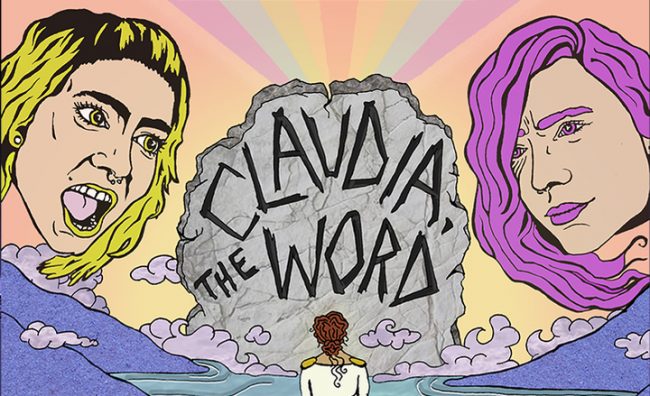 I’m mad about a lot of things these days. When it’s hard to know what to do with yourself or your anger, may I suggest listening to some blistering and beautiful feminist tunes?

I’d heard about Maude Gun from enthusiastic friends for some time (full disclosure: I know the band socially). But it wasn’t until I finally attended one of their “Maudenights” that I came to understand the full Maude Gun mission and why their presence in Trump’s America feels so crucial. Maudenights take the band’s message beyond the musical act, curating a uniquely progressive community for the evening: “shit gets really femme at MAUDENIGHT, an occult carnival of Real Life Woman Protagonists sharing experimental work of all disciplines.”

When you’re at a Maudenight, you realize how few opportunities there are to freely celebrate female innovation. At Maudnights, this isn’t open for debate: feminism isn’t something that needs to be defended from attack—it’s there to be applauded center-stage. The performances also promote and highlight the work of LGBTQIA and POC artists, crafting a showcase of traditionally underrepresented groups. Maudenight is one of the most empowering and encouraging spaces I’ve had the pleasure of witnessing.

It doesn’t hurt that Maude Gun’s debut album, CLAUDIA, THE WORD, is gorgeously and powerfully wrought. Part musical, part song cycle, all Riot grrrl sensibility, “CLAUDIA, THE WORD follows Roman matron Claudia Quinta (from 204 BCE) on an abstract and flamboyant quest to understand her Maude-given powers in the face of femininity and death.” Are you in yet? “Rooted in grunge with heavy helpings of folk and punk, CLAUDIA is ‘Jesus Christ Superstar,’ if it had been written by Patti Smith and Joni Mitchell, and was super cunty,” the band’s website proclaims, and if that doesn’t induce you to listen I’m not sure what will. Packed with references to the patriarchy, Lilith, and a spirit that flits between furious and irreverent, listening to CLAUDIA is a singular experience.

At the moment, listening to it is keeping me from a dark spiral into the unceasing gloom and doom of the news-cycle, to giving in to feeling helpless or overwhelmed: CLAUDIA has the force of thousands of years of female rage and brilliance behind it. “We have uncovered a cult following of women, centuries underground,” Maude Gun write in explaining who they are. That may be true, but their sound is an important step to claiming our space out in the open.

Check out Maude Gun on the web, on Bandcamp, iTunes, and Spotify.