Matt Smith to Wear Wig for Final Who Episode, Is This How He Becomes a Ginger? 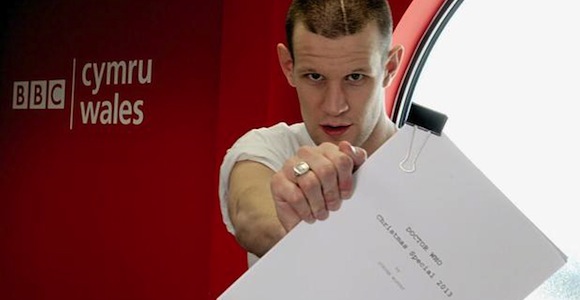 Welcome to a post about a bunch of little Doctor Who tidbits, from Matt Smith beginning work on his final episode to a hint of how long we’ll have to wait to get our first season with Peter Capaldi.

The BBC released this picture today of Matt Smith at the script reading for this year’s Doctor Who Christmas special, his last episode as the titular character, and the debut of Peter Capaldi. Smith recently shaved his head for a role in Ryan Gosling’s directorial debut, How to Catch a Monster, and revealed something that will no doubt alarm fans of his floppy coif everywhere: due to filming schedules, in his final appearance as the Doctor he will be wearing a wig.

I sincerely hope that the show takes this opportunity to finally make the Doctor a ginger. Mostly because that is very unlikely to happen so I can hope away with no consequences. But what of after the Christmas special, when we enter the long dark doldrums of waiting for series 8? Well, they’re likely to be pretty long doldrums. A brief profile of Steven Moffat in the Guardian says we’ll be waiting for most of 2014:

Doctor Who may not be quite the force it was when it returned with Christopher Eccleston and in its David Tennant heyday in the UK, but has a growing audience in the US on cable channel BBC America.

It will not return next year until the autumn, giving it plenty of time to recharge batteries. And what better way to do that than with a new Doctor?

Though I’d like to see a BBC announcement of this before I consider it set in stone, I’ve got no reason to disbelieve The Guardian, so savor that 50th and Christmas special, Whovians. It’s going to be a long summer.

(via Digital Spy and Blastr.)