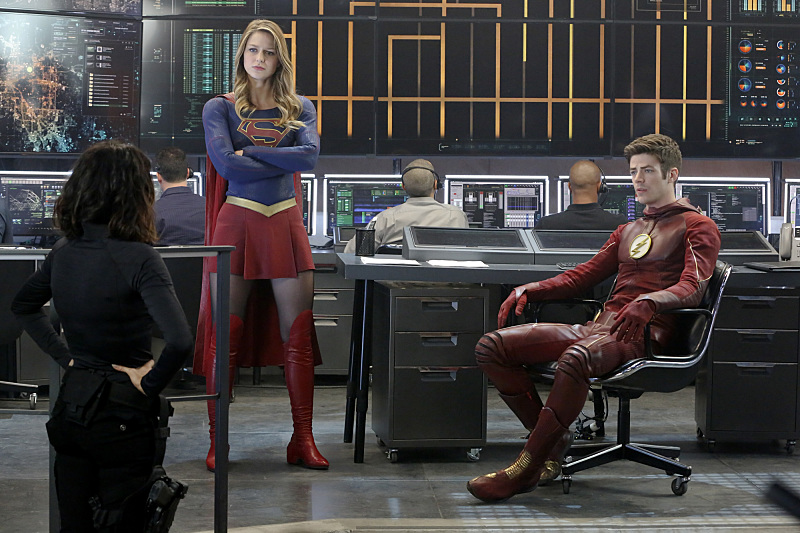 We knew it was coming, but perhaps not this soon. Well, rejoice DC TV fans! Now that Supergirl has a new home at The CW, they’ve announced that there’s already a DC-superhero crossover episode in the works that may include the Girl of Steel!

As reported by Deadline Hollywood, The CW upfronts were today, and they announced their new prime-time schedule, which among other things pairs Supergirl with Jane the Virgin on Monday nights, officially making Mondays my favorite night of television! (Yeah, you just got bumped TGIT! Sorry, Shonda.) Another interesting thing about the schedule is that every night (except Fridays) starts with a DC superhero show followed by another drama.

All the better to allow for crossovers, my dear!

As reported by io9, just before the upfronts, CW chief Mark Pedowitz enthused about the acquisition of Supergirl, saying “Just imagine what our superhero crossover episode is going to look like come December.” It’s happening, people! THIS IS NOT A DRILL. While they didn’t share any more information than that, I’m plenty excited already.

What will make this four-series crossover even easier is that production on Supergirl is moving! The first season of Supergirl was shot in Los Angeles at the Warner Bros. lot, but as I learned while covering a new DC exhibit that’s opening at the Warner Bros. Studio Tour (which I’ll be telling you about next week!), Supergirl is now joining The Flash, Arrow, and Legends of Tomorrow in Vancouver for Season Two. A Warner Bros. representative told me that, because of the tax incentives Vancouver provides, it made sense for Supergirl to join the rest of its DC TV brethren in Canada for filming, which will significantly lower their budget.

So, for those of you who worried yesterday that the move to The CW would in some way lessen the show’s quality, fear not. It’s much cheaper to shoot in Vancouver, and this move will help the show significantly. Once they figure out how to incorporate Supergirl‘s “other Earth” into the mix, this move could be the best thing that could’ve happened to the show!