For true believers only. 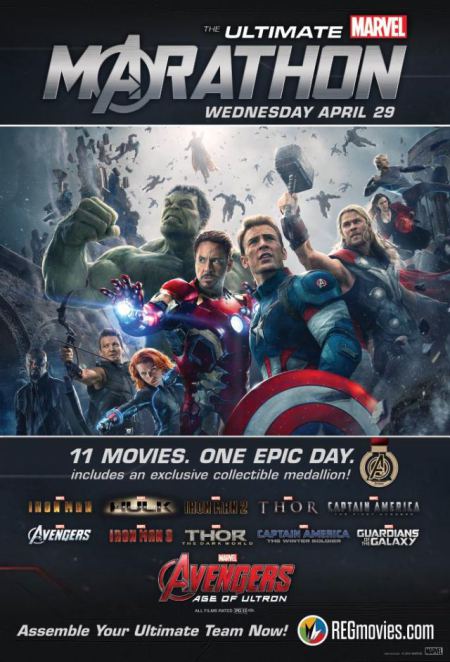 AMC and Regal Cinemas will hold marathons of all the Marvel Phase 1 and Phase 2 movies so far leading up to a screening of Age of Ultron. You’ll to need to assemble a team of Earth’s mightiest couch potatoes for this one.

The Ultimate Marvel Marathon begins in the evening on April 29th with Iron Man and goes all the way through the rest in the order they were released—yes, including the Ed Norton Incredible Hulk—until a screening of Age of Ultron at 7PM on April 30th. According to Nerd Bastards, the price will be around $65 depending on location, and you can check participating locations and grab tickets from Regal and AMC. (There are also The Avengers and Age of Ultron double-headers if you don’t quite have the time for 11 movies in a row.)

Here’s the full lineup so you can plan your eating habits/life accordingly:

3:10am: CAPTAIN AMERICA: THE FIRST AVENGER

4:20pm: GUARDIANS OF THE GALAXY