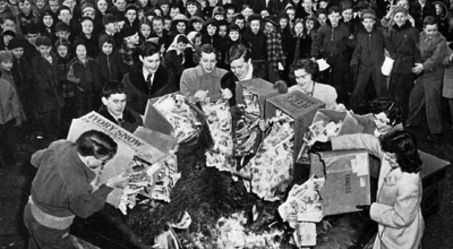 If memory serves correctly, Marvel did this last summer, asking retailers to destroy copies of DC’s Blackest Night comics in order to receive variant copies of a possibly more valuable Marvel comic. But this summer, when Marvel has three blockbusters out in theaters while DC has one incredible flop; and the second issue of Marvel’s summer series outperformed the first issue of DC’s series…

Well, words like “kick” come to mind, closely followed by “when” and “down.”

“In these tough economic times, feel it’s our duty to help,” explained David Gabriel, Marvel Senior Vice President of Publishing, Sales and Circulation. “After the overwhelmingly positive response to our Comics For Comics programs, through which we received tens of thousands of covers, we’re excited to provide retailers with the chance to help their stores through selling an ultra-rate variant.”

So which comics is Marvel asking DC to strip the covers of? Well, pretty much ever #1 issue of their summer event, Flashpoint. In return, for every 50 covers sent in, Marvel will ship the retailer one variant cover edition of Fear Itself #6. Basically, Marvel is giving retailers a way to clear any significant numbers of unsold Flashpoint back issues in a way calculated to make a competitor look as bad as possible.

We’re sure DC would return the favor, given the chance!