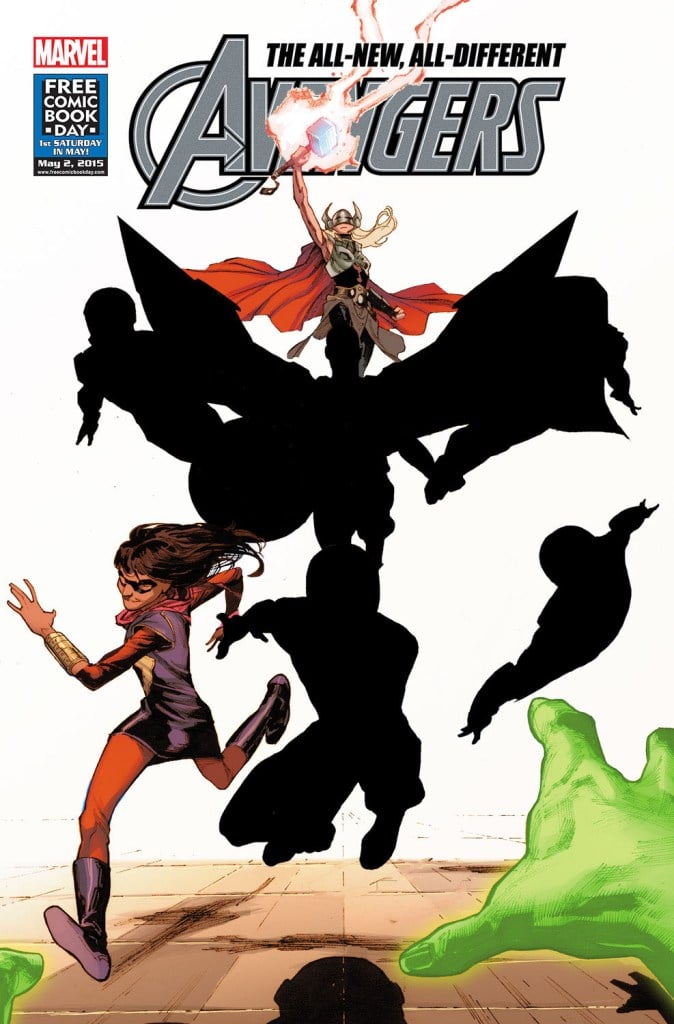 Our first shadowy look at Marvel’s “All-New, All-Different Avengers” has been released, and two of our favorite players are involved!

What do we know about Secret Wars so far? Well, it’s a “big event” where Marvel’s main universe and Ultimate universe are going to collide. Some characters may get left behind while others surface in a post-Secret Wars universe of their making. In order to move things along smoothly, Marvel will also be canceling 33 titles after all is said and done (this doesn’t mean they won’t return in the same or an altered form).

But this teaser image released today is for a post-Secret Wars book (being promoted on Free Comic Book Day) and which features All-New, All-Different Avengers. Because I guess they’ve run out of ways to differentiate teams.

“It’s your first taste of the all-new Marvel Universe as a blockbuster top secret Avengers creative team sets out on a new adventure that will have fans begging for more! Who will be Earth’s Mightiest Heroes when the dust settles from Secret Wars?” they write.

The cover was illustrated by Jerome Opeña, but we don’t know who the creative team is just yet. Here’s a little bit more Marvel wrote on the characters revealed here – Thor and Ms. Marvel.

“A new Thor for a new era, now that her identity is known, what does her membership in the Avengers portent?”

“The It-Girl of the moment, it’s not enough to be good, she’s got to be the best. Can even embiggening give her feet large enough to fill these shoes?”

This also shouldn’t be confused with Marvel’s all-female Avengers team, A-Force. Any guesses as to who the other cover characters are?