What Is Happening on Twitter? Search For Marvel, Find DC 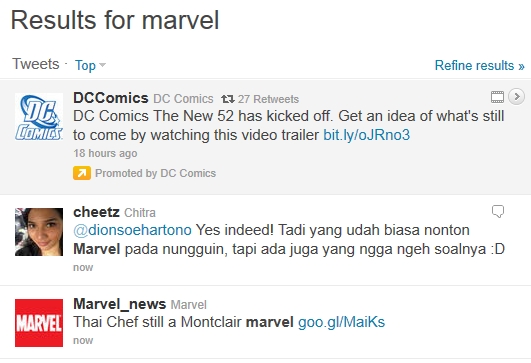 Out of what appears to be curiosity, Bleeding Cool searched for “Marvel” on Twitter and came up with the above results — Tweets mentioning DC Comics, including the official feed for DC Comics. Huh. That’s weird. Did DC somehow buy Marvel on Twitter?

This story first broke on Friday, and BC has since edited their post with the update: “And … now it’s gone.” However, I ran my own highly scientific experiment and found that this was actually still going on. Here is a screenshot from about 11:30 this morning from when I did my own search for “Marvel”: 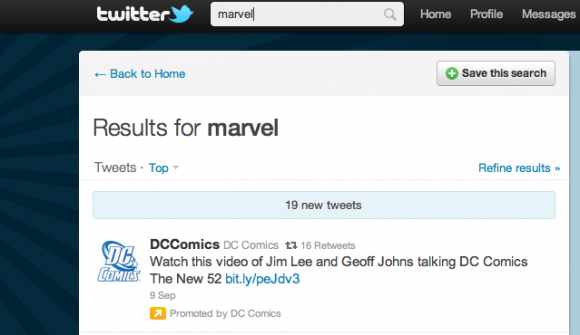 And as of this morning, no matter how many times I refreshed my search results or clicked to view new tweets, the first account to show up was always DC Comics. BC posits that DC bought “Marvel” as a keyword, resulting in DC’s feed as a “Promoted Tweet,” something that Marvel’s trademark owners will probably get a little annoyed about since they’d rather people found Marvel-related tweets when they searched for Marvel. And rightly so. True, Captain Marvel is a DC character. But is this a sneaky marketing move on the part of DC that they’re going to try to get away with as long as they can?