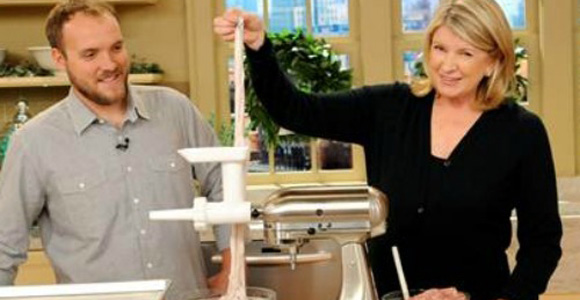 The incident happened at the taping of Stewart’s Thursday episode of The Martha Stewart Show, where she and butcher Ryan Farr were making sausage. The two eventually got to talking about sausage casings (as you do when talking about sausage) and well, you can read what  Zap2It reports happened or jump right to the videotape!

Stewart: These are really like rubber balloons actually… or condoms.
Farr: … I don’t know if I would want to use this as a condom, but…
Stewart: Oh, I bet they work. If they work for sausage…
Farr: Yea… It holds the meat in.

Apparently she didn’t stop there though, there was also “some talk about getting the casing on the ‘nose’ of the machine, getting the right ‘rhythm’ and tiny sausages.

Woah, Martha, woah. TMI. Also, let’s not put any ideas into anyones minds. Condoms exist for a reason. Does she still say, “It’s a good thing?” This is so very the opposite of that. So…very…