Men Emerge From "Spaceship" After 500-Day Mission to "Mars" 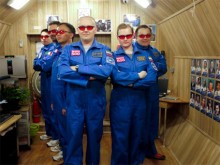 It’s going to be a long, long time before any humans walk on the red planet, but that hasn’t stopped people from preparing. Today, the 520-day long simulated mission to Mars called Mars500 has ended and the subjects emerged back into society.

The mission, originally begun some 18 months ago, was designed to gather information about how humans would behave when isolated for such an extended period of time. The crew was housed at the Moscow Institute, and consisted of Alexey Sitev, Alexandr Smoleevskiy, and Sukhrob Kamolov from Russia; Romain Charles and Diego Urbina from the European Space Agency; and Wang Yue, from China.

However, the “astronauts” were not simply locked away in a dark hole for nearly two years. An entire choreographed mission took place, complete with faux-landing on a fake planet. Throughout the mission, the participants had a variety of vital signs monitored, including their stress levels, hormone levels, sleep patterns, and general mood. Even after their “landing” at the end of the mission, the astronauts still have a rigorous physical check up before their lives return to normal.

However, it sounds like the crew had Internet access throughout their mission, albeit one with a seven minute delay with the outside world.

Though this mission is complete, there are already rumblings of staging a similar simulation aboard the International Space Station. After all, issues such as radiation and the effects of prolonged weightlessness can’t be simulated on Earth. Furthermore, with manned missions on the horizon and a private space industry growing back on Earth, there’s reportedly some desire to utilize the ISS in new and different ways.

While it could be decades before humans embark on a mission to Mars, it’s comforting to know that they’ll be following in the footsteps of these earth-bound astronauts.