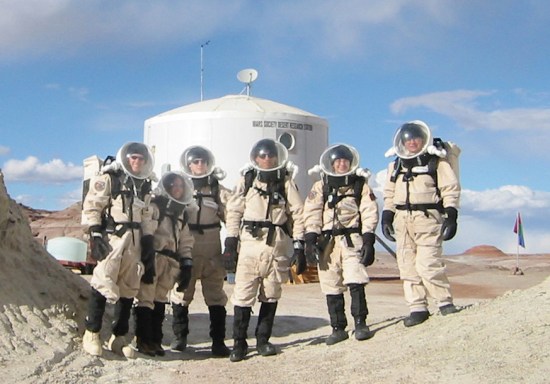 Even as the Obama Administration plans to scrap human space exploration and the prospect of manned missions to Mars becomes more remote than ever, the insurmountable odds haven’t stopped The Mars Society from conducting ongoing simulations and research into what challenges humans will face should we make it to the Red Planet. But there’s a surprising degree of drama behind their work.

According to The Mars Society mission statement, the goal of the non-profit organization is “to help develop key knowledge needed to prepare for human Mars exploration, and to inspire the public by making sensuous the vision of human exploration of Mars.” Since the establishment of the Mars Desert Research Station (MDRS) outside of Hanksville Utah in 2001, The Mars Society has maintained an ongoing research presence at the habitat.

Each research team spends two weeks at the habitat, conducting scientific research, testing equipment, and providing daily mission reports.  But lately those mission reports have begun reading more like an unreleased Duncan Jones script, as the psychological stresses of living in close quarters begins wearing down on crew members.  The current international research team, led by Belgium’s Nancy Vermeulen, has encountered a variety of problems including food and water shortages, malfunctioning or broken equipment, fatigue, and questions about commitment.

Though initial mission reports remained optimistic in spite of these issues, just seven days into the mission a report on Feb. 12 revealed emerging issues within the crew’s power structure.  After an incident involving a failure to follow mission protocols, Vermeulen writes:

It is important to know the hierarchy and stay calm and responsible for him/herself and the others. I also made clear that EVERYONE is obliged to use the EVA-suits and quads with respect and must follow the procedures.

Two days later, Vermeulen’s Valentine’s day report suggests that love was definitely not in the air:

This morning started a bit stressed for me as Nora [the crew’s Health and Safety Officer] didn’t want to accept that she failed to do the medical procedure correctly. So I forced her to do it together with me and to wait until everything was ok before leaving. The mentality of some crewmembers is: I’ve done it, so it will be ok and I don’t have to look after it anymore…

The commander’s report from Feb 15th reveals that tensions have finally come to a head:

The growing frustration that after 9 days PE, Nora and Margaux are still not able to manage the Hab systems/ standard engineering reporting system (and even don’t consider this as a problem!), exploded during the lunch.

The lack of dedication to the mission of some people overloads the others and it had to be spoken out. The problem was already there from the first day, when it came out that some people didn’t prepare anything for the mission, didn’t look at the manuals, which were send to them months ago and didn’t even prepare the tasks for their own role. The accusation into my direction that I didn’t brief enough about the systems was too much. Nicky almost exploded. Arjan reacted double: At one hand he couldn’t stop criticising the incompetence of some others during last week, but during the discussion he acted as if he was from Barcelona (don’t know anything). He has his own mission and own world.

As of Feb 16th, Vermeulen indicates that the crew seems to be doing better, especially in the presence of a Belgian television crew who have arrived to film their progress.  However, in the Engineer’s Report for the same day, Nicky De Munster writes:

Mars Surface Suits: Backpacks 1 & 3 have a broken electrical wire, caused by one of our crew members who has no discipline….

De Munster’s not naming any names, but it’s clear that these crew members are still not getting along. We’ll have to wait to see how the crew’s remaining three days at the habitat play out–their mission wraps on Feb 19th.

Meanwhile, as debate continues over the future of the space program and whether it’s appropriate to rely on private companies to ferry our astronauts into space, simulated habitats like the Mars Desert Research Station will be invaluable for testing not only human endurance in extreme Martian climes, but the ability for us to endure one another.

Read all the mission reports here.