Democrats To Strip Marjorie Taylor Greene of Her Committee Assignments. Republicans Gave Her a Standing Ovation. 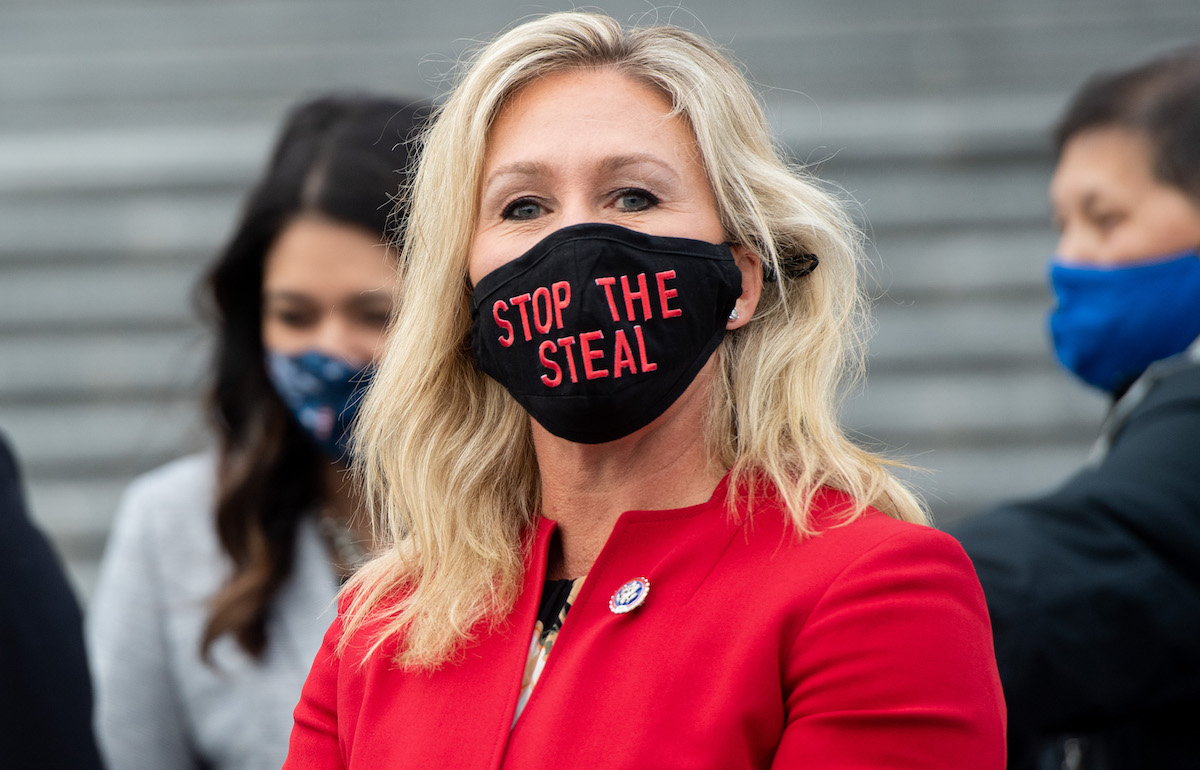 The House is set to vote to remove “QAnon Congresswoman” Marjorie Taylor Greene from her committee roles Thursday in a vote that is expected to go straight down party lines.

As a freshman member of Congress, Green had been assigned to a place on the Judiciary Committee, Energy and Commerce, Financial Services, Foreign Affairs, and Education. That last assignment is particularly egregious given what we know about her commitment to publicly insisting the Parkland school shooting was a hoax and her harassment, both online and in person, of survivors like David Hogg.

In addition to her abhorrent behavior in regard to school shootings and survivors, Greene has a long history (and present) of racism, anti-Semitism, and Islamaphobia. She believes in and promotes the QAnon conspiracy theory. She thinks Hillary Clinton and Huma Abedin tortured and murdered a young girl and literally wore her face on theirs. She believes the California wildfires were started by Jewish space lasers. She has called for the execution (or assassination) of Nancy Pelosi.

People voted for her but the least Congress could do is remove her from these additional positions of power.

It’s rare for Congress to strip a member of their assignments, but not unheard of. Usually, that punishment is reserved for convicted criminals but just two years ago, now-former representative Steve King was removed from his committees after insisting that “white supremacy” and “white nationalism” were perfectly fine ideologies.

Greene’s comments have been no less offensive than King’s but the Republican Party has changed, and significantly so. Right now, the GOP seems more concerned with punishing Liz Cheney for voting to impeach Donald Trump than with censuring Greene for her overt bigotry and conspiracy theories. When Greene took to the House floor to speak Wednesday, she was given a standing ovation by her party.

Ahead of the House vote on censuring her, Greene attempted to defend herself and what she says are views she no longer holds. She has walked back her support of QAnon and said that she does, in fact, believe school shootings are real and that 9/11 happened. She didn’t exactly take responsibility for her actions though, or her decision to believe those things, saying instead that Facebook “allowed” her to believe them after mainstream media drove her to seek news on the platform.

The passive voice doing ALL THE WORK here https://t.co/YSiGPmOOzv

you can plot the modern gop along an axis of “9/11 is the only thing that has ever happened” to “yes i will agree that it happened” https://t.co/9SrmOC04E6

Still, that earned her a standing ovation from her own party members.

Greene told Republicans last night her embrace of QAnon was a mistake that happened at a dark period in her life, according to @politico playbook. pic.twitter.com/LGMiP8dlUS

Just as Marjorie Taylor Greene decided to believe absolutely unbelievable, dangerous conspiracy theories she saw online, the GOP has decided that they are the kind of party that will tolerate, even celebrate someone like her. The Washington Post ran an article Thursday claiming Greene “seeped into Congress through cracks in the foundation.” She didn’t “seep.” They opened the door wide and applauded as she entered.

The only reason she’s facing any sort of consequence whatsoever is because of the Democrats in Congress, as Republicans already refused to hold her accountable in any way.

Rep. Marjorie Taylor Greene departs after a House Republican caucus meeting, where they opted not to punish the newcomer for incendiary comments, including support for violence against Democrats. More photos of the day: https://t.co/dbDVMlNyy1 📷 Joshua Roberts pic.twitter.com/K6XBHAVOv5