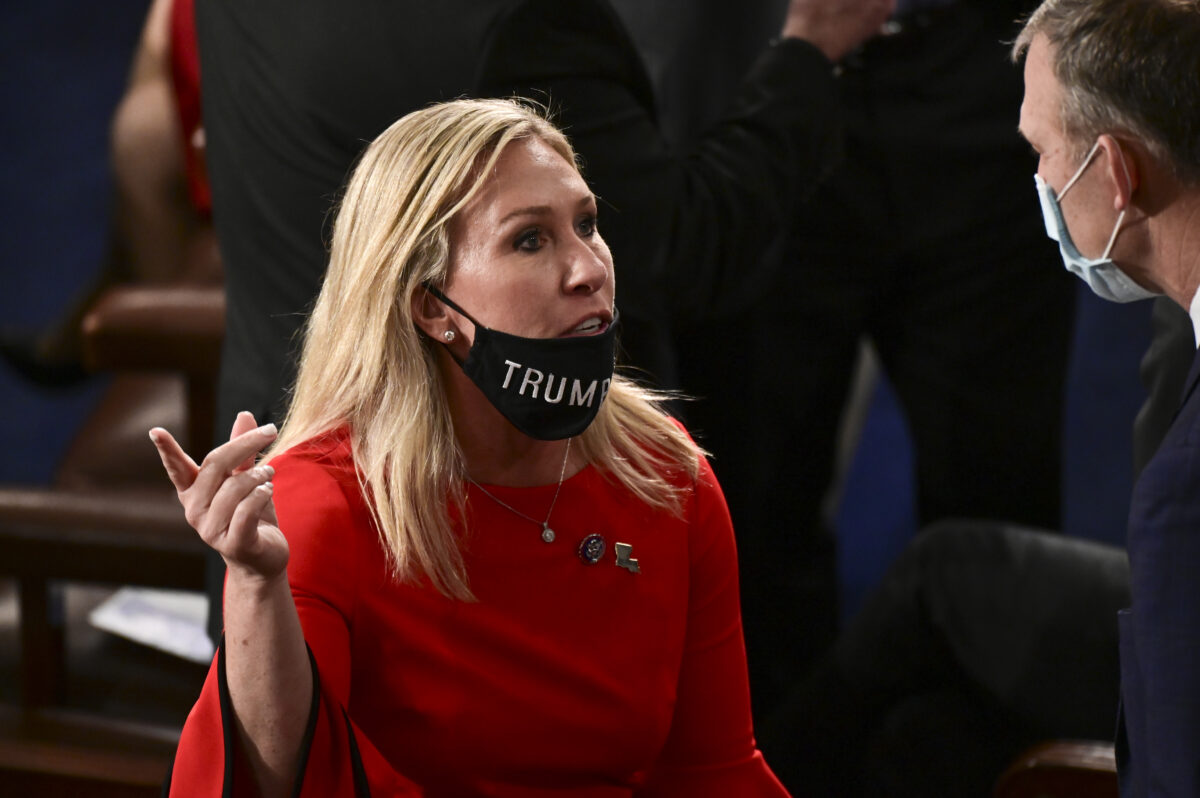 According to two Washington Post reporters who witnessed the event, Republican Rep. Marjorie Taylor Greene—best known for her white supremacy, transphobia, Islamaphobia, her support for QAnon, and her intense love of guns—”aggressively confronted” Democratic Congresswoman Alexandria Ocasio-Cortez outside the House chamber Wednesday.

According to those reporters, Greene shouted at her colleague twice, yelling, “Hey Alexandria!” Ocasio-Cortez didn’t stop walking, so Greene “picked up her pace and began shouting at her and asking why she supports antifa” and yelled that Ocasio-Cortez was “failing to defend her ‘radical socialist’ beliefs by declining to publicly debate the freshman from Georgia.”

“You don’t care about the American people,” Greene yelled. “Why do you support terrorists and antifa?”

This is not a new move for Greene, although one would hope that she wouldn’t still be pulling stunts like this after having been elected to Congress. Greene has done this before—following someone, yelling accusations and “gotcha” questions, then claiming that person was just too “cowardly” to debate them on the street. She did it to Parkland shooting survivor-turned-gun control activist David Hogg when he was just 18 and on his way to speak to Congress.

Here’s the full 2 minute 48 second video of Marjorie Taylor Greene trolling @davidhogg111 like the deeply unserious person she is.

This was before she ran for Congress and is on her YouTube page.

In the video, she wonders why Hogg gets to meet with US Senators and she doesn’t. pic.twitter.com/Q2Q0ZahU23

Rep. Ocasio-Cortez wisely chose not to engage with Greene, “only turning around once and throwing her hands in the air in an exasperated motion.” Before walking away, Greene told a small group of reporters, “She’s a chicken, she doesn’t want to debate the Green New Deal,” adding, “These members are cowards. They need to defend their legislation to the people. That’s pathetic.”

Except Greene is not a member of “the people.” She’s a member of Congress. And harassing a colleague like this isn’t politics, it’s theatre, and it certainly does nothing to help her constituents or further actual debate.

Ocasio-Cortez doesn’t look to have commented on the encounter aside from a nice pseudo-subtweet:

“We hope leadership and the Sergeant at Arms will take real steps to make Congress a safe, civil place for all Members and staff—especially as many offices are discussing reopening. One Member has already been forced to relocate her office due to Congresswoman Greene’s attacks,” the statement reads.

That member who moved offices is Missouri’s Cori Bush, who said earlier this year that a maskless Greene stopped her in a hallway and “berated” her. “I’m moving my office away from hers for my team’s safety,” she wrote on Twitter.

Greene has also had public fights with her office neighbor, Democratic Rep. Marie Newman. Newman hung a transgender flag outside of her office, both to honor her trans daughter and to show opposition to Greene’s attacks on trans rights. Greene responded by hanging a sign in the hallway reading “There are two genders: male and female. Trust the science.” She also misgendered Newman’s daughter on Twitter.

Greene has been exploding on Twitter, attacking AOC, Nancy Pelosi, and even members of her own party who are grossed out by her ludicrously unprofessional behavior. Between her shameless disrespect for her colleagues and her heavy Twitter finger (complete with un-clever nicknames for her perceived rivals), she seems set on carrying Trump’s mantle of pettiness and petulance moving forward.