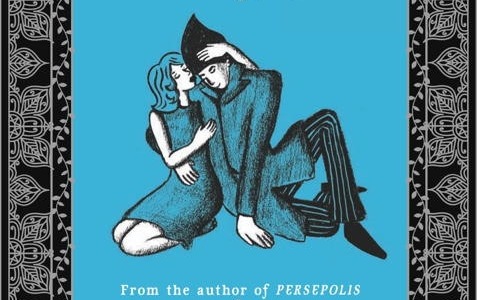 We make no secret of the fact that we love Marjane Satrapi here at The Mary Sue, not just because she’s an incredible graphic novelist, but because she says things like this on the slowly changing status of women in her native Iranian society:

“Before, it was like they cut off [women’s] legs and said, ‘The door is open, run!’ Now, it is like the door is closed but we have strong legs, and with strong legs we can break the door.”

And so we’re super excited to see that her latest made-of-paper work is finally getting an English translation and publication.

The Sigh, originally Le Soupir, was published in 2004, three years before the animated Persepolis (arguably Satrapi’s most well known project) even came out, and is a fairy tale concerning the daughter of a rich merchant:

The Sigh follows Rose, one of three daughters of a rich merchant who always brings gifts for his girls from the market. One day Rose asks for the seed of a blue bean, but her father fails to find one for her. She lets out a sigh in resignation, and her sigh attracts the Sigh, a mysterious being that brings the seed she desired to the merchant. But every debt has to be paid, and every gift has a price, and the Sigh returns a year later to take the merchant’s daughter to a secret and distant palace.

According to Amazon, the book will be available on November 8th. We’ll be marking our calendars.