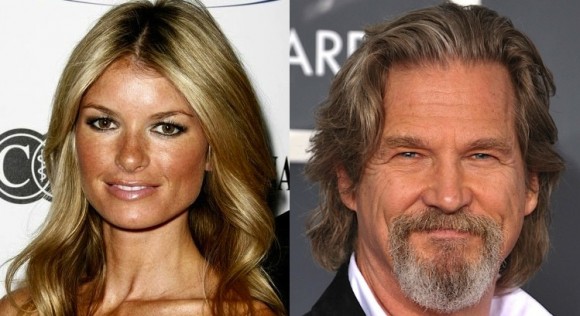 Okay, R.I.P.D., now you have our attention: In the latest casting news for the film adaptation of the Dark Horse title Rest In Peace Department, it was announced that Victoria’s Secret and Sports Illustrated model Marisa Miller will be playing the part of … Jeff Bridges. Or, at least, she will be playing the corporeal version of the dead police officer named Bo whose spirit is being played by Jeff Bridges. Because, as you may have guessed, the Rest In Peace Department is made up of dead cops who answer to God.

So, we’d have to think that Miller gave one hell of an audition since she’s going to be playing a living version of a living Oscar-winner. As it stands, Miller’s only acting experience includes small roles on Entourage and How I Met Your Mother. Guess what she played on those shows? A supermodel. Named Marisa Miller. (She also had a small role on Gary Unmarried, on which she did not play a model, just a regular person who happens to look like a model.) But okay! Maybe she’s been really, really awesome this whole time and preferred to make money by not talking. That’s totally cool. Welcome to acting, Marisa Miller!

R.I.P.D. also stars Ryan Reynolds as another dead cop, Nick Walker (changed from Cruz in the comic) and the living version of him will be played by James Hong, who is not only an Asian man, but is also 82 years old. (And has been making movies for over 50 years.) Other recent casting announcements include Glee‘s (and Get the Picture‘s) Mike O’Malley, Mary Louise Parker, and Kevin Bacon. The film will be directed by Robert Schwentke, who previously directed Red and The Time-Traveler’s Wife. Here is the synopsis of the comic, written by Peter Lenkov, from Dark Horse:

Welcome to the Rest In Peace Department — the devoted, yet dead, officers of divine law enforcement “patrolling the deadbeat…reporting to one boss.” Yep — THAT boss. Nick Cruz was murdered by an unknown assailant, at the height of his personal and professional life. Now he’s traded a hundred years of service to the R.I.P.D. in exchange for a shot at finding who killed him. Unfortunately his search will take him to Hell and back — literally!