New Oldest Person in the World? This Amazonian Woman Is Celebrating Her 121st Birthday!

Last weekend, we told you about Besse Cooper, who was being called the world’s oldest person after she celebrated her 115th birthday. But there’s a new supercentarian celebrating a birthday now, and it looks like Mrs. Cooper may have lost her title — Maria Lucimar Pereira celebrated her 121st birthday yesterday. Something tells me they won’t be fighting about this.

Survival International (to whom we credit the top pic) has found documentation in the form of a birth certificate that shows Ms. Pereira’s birthdate as September 3, 1890. A member of the Kaxinawá tribe in Brazil, Pereira is an indigenous Amazonian who survived the rubber boom that wiped out 90 percent of the native population in the late 1800s. There are only 80 people in her tribe today, though four of them are over the age of 90. So longevity is certainly not unheard of. 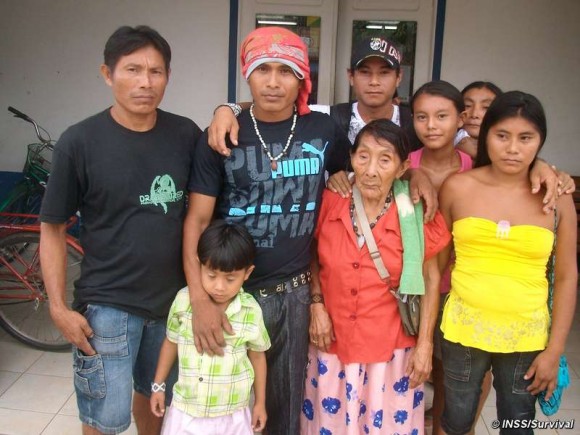 The tribe credits their longevity to staying away from the nearby cities and their influences, and that includes not using any artificial or manufactured products and eating natural foods that can be found in the forest, including “grilled meat, monkey, fish, manioc (a root vegetable), and banana porridge.”

But the best part is that even at 121, Pereira still travels to the nearby city of Feijó, visits her grandchildren, and tells stories to the people in her community. And she has nearly a century and a quarter’s worth of stories to tell, so she must also still have a lot of endurance. Guinness World Records is still listing Mrs. Cooper as the world’s oldest living person, but since Pereira’s birth certificate was confirmed in 1985, let’s hope she also gets the recognition she deserves. Congratulations, Maria Lucimar Pereira!