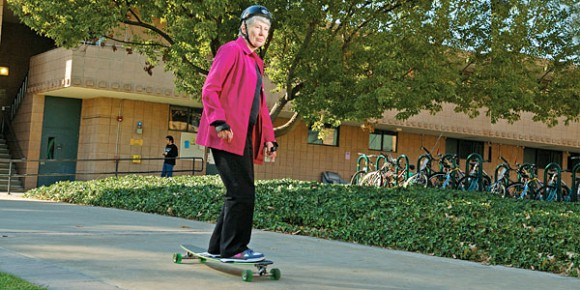 Since taking the position of president of California’s Harvey Mudd College in 2006, Maria Klawe has earned herself some bragging rights among her peers, specifically this astounding statistic: 42 percent of the college’s computer science majors are female — that is more than triple the number of women pursuing that major since Klawe’s arrival just five years ago. That’s not all she’s accomplished in her short time at Mudd — she was also responsible for expediting changes in the curriculum to keep the school and its students ahead of the programming industry curve. Her success is already making an impact on nearby Silicon Valley, and she also has plans to attract more underrepresented minorities to the field. Oh, and she skateboards around campus. That’s her in the picture above. I’ll bet you’d like to know more about Maria Klawe now, wouldn’t you?

Before coming to Mudd, Klawe was the dean of Princeton University’s engineering school. And before she got to Princeton, she helped create the computer science program at the University of British Columbia in Vancouver. (That was after she earned her bachelor’s and doctoral degrees in math at the University of Alberta.) Then, when she was hired at Mudd, she pretty much overhauled the curriculum within a span of two years — she changed the mandatory introductory course, Java programming (which is not that popular anymore in programming circles), which integrated both experienced and new computer science students. Under Klawe, the introductory course is now “CS for Scientists,” is divided up into a beginners course, a course for those with programming experience, and another class with a focus on biology. She has also replaced Java with Python, which was designed to enable easier readability. And according to Klawe, the most “hard core” computer science class (“Data Structures and Program Development”) has an all-time high number of 57 students, almost half of whom are female.

Professors who have been teaching at Mudd since before Klawe’s arrival have said that the positive changes she has made were unthinkable. Says dean of faculty and a professor Robert Cave, “In the last four years, we have done things that I didn’t think were possible.” He has been at Mudd since 1988.

Klawe’s work at Mudd has also earned her a spot on several high-profile boards throughout the tech industry, including Microsoft and Broadcom, and she formed another group of prominent women in the tech industry including Facebook’s Sheryl Sandberg, Google’s Marissa Mayer, and Cisco Systems’ Kathy Hill. But one institution that is taking a very close look at Klawe’s accomplishments is Silicon Valley, and they’re getting pretty amped about the prospect of hiring more women in the tech industry — right now, only 14 percent of the industry’s workforce are women, but the increasing number of female computer science students may not have to look too far from the Mudd campus to find jobs after graduating. All thanks to Maria Klawe.

And yes, the skateboarding is a regular occurrence on campus:

“I look really funny” with the protective gear, she says, which helps persuade shy students to open up.

Yes — they open up, and then they take computer science classes and possibly change an entire industry. Not bad for a day’s work.