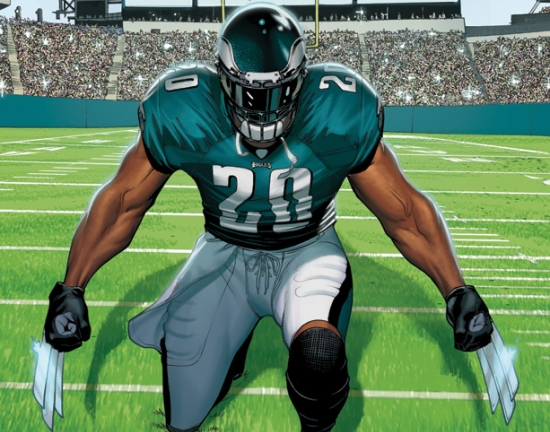 Brian “Weapon X” Dawkins is hanging up his jersey this weekend after 16 years in the NFL. This is a pretty standard practice, but Dawkins has been anything but standard on the field. To commemorate this somber occasion, Marvel will actually be handing out a custom poster by Jorge Molina of the well-known Philadelphia Eagles safety depicted as if he were actually Wolverine.

Specifically, this comes courtesy of Marvel Custom Solutions and is apparently something many folks decided would be an appropriate gesture for Dawkins’ retirement. Comic Book Resources explains:

Eagles President Don Smolenski said the idea to bring in Marvel Custom Solutions to help commemorate Dawkins’ retirement occurred to several people in the Eagles organization at the same time.

“Dawk loved Wolverine – his locker was full of action figures,” Smolenski told CBR News. “He’s a very quiet, calm man off the field — but one who would get incredibly fired up before games; he called it ‘turning into Weapon X.’ … We’re going to have 70,000 people at our game celebrating Brian’s career. This is such a great way to let them share in the celebration.”

With his retirement, there clearly need to be a new comics-themed nickname established for another player. We humbly suggest Juggernaut or perhaps even Colossus.