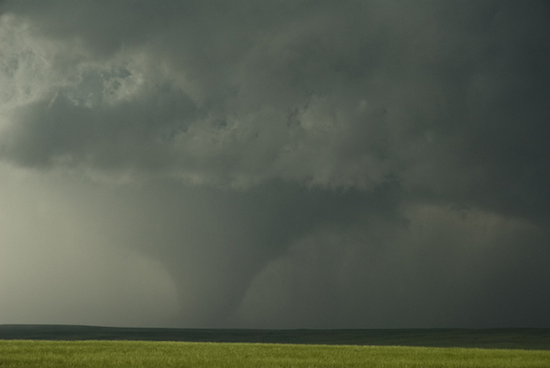 Whenever we think of tornadoes, more often than not the image of an unstoppable natural engine of destruction wreaking havoc on unsuspecting farmers in rural America typically comes to mind — that and the 1996 Bill Paxton vehicle Twister. Canadian entrepreneur and engineer Louis Michaud, on the other hand, sees a potentially eco-friendly new source of energy. Meddling with the most primal forces of nature, Michaud has outlined a method to create and harness these swirling vortexes of doom as a means of powering turbines that generate useable energy. The plan may sound like the dastardly machinations of a comic book super villain, but the project has actually piqued the interest of a high-profile financial backer.

Michaud’s company, AVEtec Energy Corporation, aims to create an Atmospheric Vortex Engine (AVE), a proposed 130 foot column-shaped containment unit that will create a tornado in a controlled setting — basically a giant, terrifying version of the soda bottle tornados you built as a kid, with much more potential to bring governments to their knees and “show them, show them all.” According to the company, the creation of a vortex begins by blowing hot air at an angle into the AVE. Even the hot air that fuels the process is recycled, collected from sources such as power plants, factories, data centers, and politicians.

From there, the difference in temperature between the hot air and the above atmosphere will present the opportunity to manipulate the spinning air into a vortex, which in turn powers a series of turbines that will generate energy process while producing zero carbon emissions or harmful pollutants. Need even more blue-sky thinking? AVEtec has you covered, claiming that the AVE would be a cheaper alternative to coal and even yield more total energy than thermal power plants already produce.

The plan does seem to be on the ambitious side, but that hasn’t stopped PayPal co-founder Peter Thiel from funding Michaud’s project to the tune of a cool $300,000. Even though the AVE is still an unproven technology since the actual unit isn’t, well, actual, but merely conceptual, Thiel’s backing and the aid of Lambton College in Ontario may help Michaud make his AVE prototype a reality. That means we could soon see whether the AVE has legs, or is just one more cool idea that looked good on paper.

(Geek.com, image via Michael Carlson – Photography) Relevant to your interests